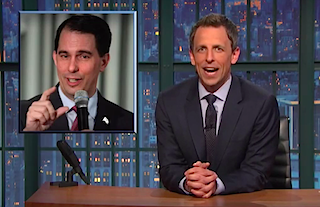 With the 2016 presidential candidates’ aggressive appeals to New Hampshire voters well underway, Seth Meyers, who grew up in the Granite State, launched a new segment Monday night titled “Live Free or Die Tryin’.” Over the next several minutes, the host broke down the various GOP candidates’ mostly failed attempts to seem “relatable” to voters.

Below are some of his best zingers.

On Gov. Scott Walker’s assertion that Hillary Clinton has never shopped at Kohl’s:

“If your best attack on Hillary Clinton is her wardrobe is too fancy, I don’t love your chances… I’m pretty sure if she did spend any time bargain hunting, Fox News would spend a week on Bargain-ghazi.”

On Mike Huckabee’s desire to cut off the head of Iran the “viper”:

“Huckabee failed to add, ‘Although if the last two times you tried to take off a snake’s head it turned into a decades-long war, maybe you might at least consider leaving the snake the fuck alone.”

On Jeb Bush repeatedly mentioning the birth of his fourth grandson:

“Hey, we know what you’re trying to do. You can’t make us forget the old bushes by telling us about new Bushes. It’s not like we only have room in our heads for three Bushes, we can remember them all. We’re not George W.”

And finally, going back to Scott Walker, Meyers called out the Wisconsin governor for attending a gay wedding reception but not the ceremony:

“Hey, we all want to just go to the reception. The open bar is the payment for sitting through the service. You sir, are a freeloader.”