Niall Ferguson: Obama’s Legislation Defective Because He Essentially Delegated It To Pelosi, Reid 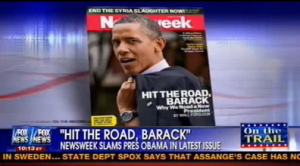 On her program Monday night, On The Record host Greta Van Susteren spoke with Niall Ferguson, who penned Newsweek‘s attention-grabbing cover story detailing the reasons President Barack Obama has faltered and failed as our Commander-in-Chief.

Looking at the U.S. from something of an outsider’s point of view, Ferguson said he hasn’t seen people asking the right questions:

Number one, is the President an effective leader in Washington? Has he led effectively on the domestic policies of the day? And two, is he an effective commander in chief? If you put aside all of the nitpicking arguments about this and that, cost of Medicare and ObamaCare, and knuckle down and ask those key questions — Has he delivered as a leader? Has he led effectively? — I don’t think the answer can be yes. Now, I shared many people’s high expectations of the President when he was elected. Though I was a McCain supporter, I had to concede that he had made the most effective campaign. But now four years on, we have to ask the tough questions. Has he really delivered as President? I don’t think he has.

As Ferguson sees it, the key problem with President Obama is that he “delegated the detail of legislation to his own party in Congress.” This, he said, accounts for defective regulation: “It was essentially handed to Nancy Pelosi and Harry Reid and left to them to design.”