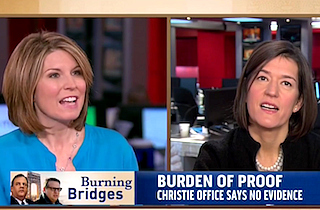 On Morning Joe Monday morning, former Bush communications director Nicolle Wallace interrogated Kate Zernike, the New York Times point person on the Bridgegate scandal, arguing that the Times once again seemed to miss the ball when it came to reporting on conservatives.

Zernike broke the story this weekend of David Wildstein’s letter alleging “evidence exists” that Christie was aware of the lane closures on the George Washington Bridge as they happened—but Wallace and the Morning Joe crew wondered whether that was actually a “bombshell,” or whether the Times was blowing it out of proportion.

“I’ve been involved in a lot of battles with the New York Times and this is where they all start, Mars and Venus,” Wallace said. “Chris Christie’s argument is that he didn’t know that the purpose for the closure was political. Your story seems to ignore that point altogether! This is this isn’t a story about lanes being closed, it’s about why they were closed. There’s nothing that Wildstein that suggests Christie knew why they were closed. This is where the Republicans and the New York Times always end up at war. We’re even not talking about the same story!”

“I admit, I did not read Republicans Are From Mars, New York Times Reporters Are From Venus,” Scarborough said.

“I should write that,” Wallace, the novelist, replied.