Angie Varona Pictures: Should Nightline Have Shown Them?
VIDEO 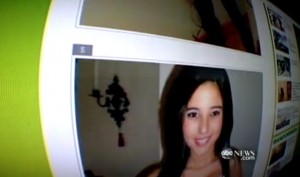 Four years ago, 14 year-old Angie Varona snapped some sexy, semi-nude pictures of herself and posted them online for her then-boyfriend. The password she used to protect the gallery was hacked, the photos spilled out onto the rest of the Internet, and predictably creepy things happened from there.

On Thursday, Nightline profiled Varona, now 18. And, in between shots of her sobbing over the torment of the pictures being leaked and schoolmates calling her names, the show managed to proudly display — to a national television audience — at least 20 of the photos that have ruined her young adulthood.

The voiceover narration by co-anchor Terry Moran began with a normal introduction to the teenager:

What happened to Angie Varona is every parent’s nightmare in the digital age; a cautionary tale for our time. Angie was 14, she had a boyfriend, her first. And like so many teens and young people today, she took some racy pictures of herself.

…and then it veered into territory that would usually end up with Chris Hansen walking out from curtains in the kitchen:

“So here they are, a few photographs of a 14 year-old girl in bra and panties, taken for her first boyfriend.”

The planning for this episode likely played out like this:

“We’re doing a segment about a teenage girl who has been traumatized because semi-nude pictures of her that she took when she was 14 have been passed around and viewed by millions of people against her wishes.”

“How about we take those pictures…and put them on national television!”

“And we can maybe post some online with the story!”

“Perfect! What can go wrong?”

Lots of people may have never heard of Angie Varona before last night. Which is fine — it was a cautionary tale for parents and she agreed to be on the program. But if they felt the need to show photos, they could have at least kept the panning high and tight to her face. The flickering screen and skewed angles would have given away that it was from a computer. Instead, Nightline created, at best, a bit of unintentional comedy, and at worst, another traumatic episode for a teenage girl who made a massive mistake four years ago.

Watch the Nightline clip below, courtesy of ABC, and judge for yourself if the show went over the line: