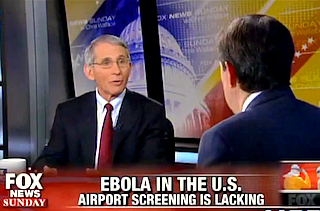 Dr. Anthony Fauci of the National Institute of Allergy and Infectious Diseases explained the Sciences to Fox News Sunday host Chris Wallace, who quizzed him on a variety of ebola-related issues, some of which veered toward the wildly hypothetical.

Wallace especially wanted to know why flights out of affected countries like Liberia had not been banned. Fauci explained that isolating a country in the midst of a crisis created an unbearable strain on an already vulnerable infrastructure and prevented supplies from making it to affected regions. “Experience is that when you close off a country, you create such stress and fear, you amplify the problem,” Fauci said.

Wallace added that only two people out of 10,000 receiving additional screening when they landed. Fauci explained that this was because nobody symptomatic would have been allowed to fly in the first place. “If you have symptoms or a fever,” he said, “you will not be allowed on the plane.”

Fauci also all but rolled his eyes at Wallace’s suggestion that ebola could sneak across the border, either through undocumented immigrants or as part of a bioterrorist plot.

“I wouldn’t be worried about ebola coming across our southern borders when we have an ebola issue right now in South Africa,” Fauci said. “That’s a hypothetical that’s very far-fetched. As far as terrorism — nature right now is the worth bioterrorist. I’m worried more about natural evolution in west Africa than I am about a terrorist.”

“If I were a bioterrorist, [ebola] would not be my choice,” Fauci added, given that it required contact to spread. “It would be inefficient.”

Fauci concluded that he understood the fears over the virus, but that the strength of the U.S.’s health infrastructure made it close to impossible to replicate what’s happening in west African in the U.S. “We have to get our actions and our policies based on scientific testing,” Fauci said. “It could be will see another case, but we won’t have an outbreak.”