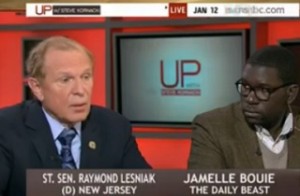 As the Bridgegate scandal continues to unfold, questions have arisen about Governor Chris Christie‘s (R-NJ) statements at his marathon press conference Thursday, but even his gubernatorial opponent Barbara Buono (D-NJ) has stopped short of using the dreaded “L-word” on the embattled Guv. State Senator Ray Lesniak (D-NJ) showed no such reticence on Saturday morning’s Up with Steve Kornacki, flat-out calling Christie the “Liar-in-Chief.”

Discussing an email from the latest raft of subpoenaed documents, host Steve Kornacki said “When I see that an e-mail marked ‘priority high’ from Pat Foye, saying the New Jersey guys may be breaking state and federal law, is forwarded to Regina Egea, someone that close to the Governor, back on september 13, this had to have come up with these specific concerns at a very early level.”

“For sure,” Lesniak agreed, adding “and the Liar in Chief is Chris Christie, and the obstruction of justice is what is going to be his biggest problem. I don’t believe he was involved in the lane closures itself, but those lane closures violate federal law.”

Regina Egea was Director of the Authorities Unit of the Governor’s Office at the time, and is now Governor Christie’s Chief of Staff.

Here’s the clip, from Up: