No Joke: Stephen Colbert To Testify Before Congress This Friday 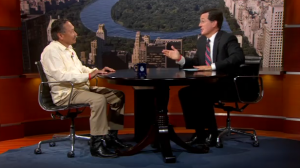 The United Farm Workers of America have sent out a press release stating that their president, Arturo S. Rodriguez, would be appearing before the House Judiciary Committee’s Subcommittee on Immigration, Citizenship, Refugees, Border Security, and International Law this Friday. One interesting tidbit in the release also mentioned who he’d be joined by; none other than Stephen Colbert!

From the press release via Politico:

“Rodriguez appeared on a segment of ‘The Colbert Report’ and Colbert spent a day in August working at a corn and vegetable farm in New York state.

The UFW launched its national ‘Take Our Jobs’ campaign on June 24, inviting U.S. citizens and legal residents to replace hundreds of thousands of immigrant field laborers, most of whom are undocumented. Since then, more than 3 million people have visited the campaign website, www.takeourjobs.org. Of those visitors, 8,600 have expressed an interest in seeking employment as farmworkers. Despite the numbers, only seven people have taken the UFW up on its offer to take a job in agriculture.”

Brian Montpoli reports for CBS News Political Hotsheet blog: There is no official word on why Colbert is testifying at the hearing or what he plans to address, though an unnamed Republican told the Daily Caller that he will be appearing “in character.”

He may be discussing a program called “Take Our Jobs” that reportedly “offers Americans the chance to try working in the fields if they really think good jobs are being lost to illegals.”

Below is the video of Rodriguez’s appearance on The Colbert Report last July in which he promised to work with the UFW in the fields: