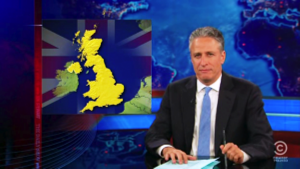 One of the nice things about having a Bill of Rights is that it specifically lays out freedoms given to the people and the press. The U.S. Constitution declares that freedom of speech and freedom of the press can never be infringed upon. Unfortunately, if you live in a nation where this is not clearly stated, you can legally censor media outlets without fear or repercussion.

Like all good stories about political satire, this one involves none other than The Daily Show with Jon Stewart. In England, if you want to watch the program, you can either catch it online or watch the televised “international edition.” This edition of The Daily Show airs once a week, and is comprised of the best segments of the previous week’s shows. So naturally, when segments were being chosen for this week’s installment, one of the highlights was the show’s coverage of Rupert Murdoch‘s testimony before Parliament last week on allegations of phone hacking taking place at News Corp. tabloids.

Here’s a piece of the segment to refresh your memory:

However, this week’s international edition was mysteriously unavailable for viewers, so TV writer Graham Linehan tweeted Channel 4 and asked why the episode was not being aired in its normal timeslot. This is what Channel 4 tweeted back:

Yes, you read that right. In England, it is illegal to use footage from Parliament for satirical purposes. Just think about that for a second. Could you imagine if we had a law on the books saying it was illegal for late night shows to use CSPAN footage to mock politicians? That would be a fundamentally undemocratic principle.

When we think of media censorship, we think of totalitarian governments stifling dissent through violent means and cutting off access to services like Facebook and Twitter. However, satire is a very effective way to criticize those in power, and even if you live in a free society, by banning its expression in one form or another you are setting limits on dissent (and proving you have a sh*tty sense of humor).

England is not the only democratic nation indulging in these odd legal tactics. Last year, Brazil effectively banned its satirists from mocking presidential candidates leading up to the election. Here is the argument advocates of the ban made:

This is vaguely reminiscent of a 2007 New Zealand ban that essentially serves the same purpose of the current ban in England: satirists cannot use footage from Parliament to mock politicians.

I have to highlight two important points about the New Zealand ban, but be warned: after reading them you may be inspired to bang your head on the nearest desk and shout “Can you believe these idiots?!” at the nearest person or domestic animal. Behold:

On Thursday night MPs voted overwhelmingly to amend the current rules to ban shots which satirise or denigrate MPs – like footage of them yawning, or nodding off in the House.

And this is from former MP Dover Samuels:

“The problem is when you [the media] take a photo of me, you always take it of my bad side.”

Again, this argument was accepted as valid in drafting the law. If you are sensitive about people getting your bad side, here’s a tip: DON’T ENTER POLITICS. This is essentially the political equivalent of punching your little sister because she’s laughing at you. Just because you are overly sensitive does not give you the right to overreact.

Of course, there are more devious reasons why satire is banned. Here’s some perspective to consider: last year, the government of Pakistan banned the satirical play Burqavaganza. As Mediaite’s Jon Bershad pointed out at the time, “the idea that the play was performed at all and that there is debate over whether it should pe performed again seems downright hopeful” considering Pakistan’s appalling human rights record.

And two years ago in Kuwait, information minister Al-Sheikh Ahmad Abdallah al-Sabah shut down a satirical program called Sawtak Wasal after only three episodes on the air. (Geez, and NBC pulled The Paul Reiser Show after only two episodes.)

Reporters Without Borders’ 2010 Press Freedom Index ranks Kuwait 87th (tied with the United Arab Emirates and Tonga) out of almost 200 on the scale, while Pakistan comes in at 151. In the spirit of fairness, I should point out that New Zealand, Australia, and the United Kingdom are ranked higher on the index than the United States, so I am not arguing that we are necessarily a freer nation than them merely because of their restrictions on satire.

However, another example of the British press being influenced to reveals yet another wing of media corruption as of yet not addressed in the current News Corp. investigations.

Remember the royal wedding? Well, if you’re reading this you have access to an electronic device, which means you probably remember it. This story involves Australia, and to understand this story, we all need to remember that Australia is part of the British commonwealth. For its royal wedding coverage, ABC (the Australian Broadcasting Company) wanted to bring on the popular comedy group The Chasers to offer their unique brand of tongue-in-cheek comedy to the proceedings.

ABC was directly confronted by the BBC about this decision. The BBC threatened to pull their feed to ABC unless they struck the satirical coverage. This was part of a larger policy decreeing that absolutely no footage of the royal wedding could be used for any satirical purposes whatsoever. The key difference between this ban and the ban on using Parliamentary footage for satirical purposes is that the royal wedding ban was international. Australia couldn’t use the footage to make fun of it, and as Jon Stewart revealed to Keira Knightley in a May interview, neither could American broadcasters.

And according to an ABC article on the matter, the BBC was acting on behalf of Clarence House. What exactly is Clarence House? The official residence of Prince Charles, his son Prince William (the groom), and several other members of the royal family.

Or to put it another way, the royals said “Jump!” and the BBC said, “How high?” The BBC was heavily criticized by anti-monarchists for a perceived bias in favor of the royal family, described by the advocacy group Republic as “beyond sycophancy.” Republic is a political organization calling for the abolishment of the monarchy, and it argued that the BBC’s coverage of the wedding was not objective in any sense and equal time should be given to republicans to present their views. The group’s campaign manager explained their efforts thusly:

“When we met Helen Boden, the BBC’s director news, there was some positive engagement with our request for more balanced coverage, but no concrete commitment. We can now see the result of this. We will be taking it up with the BBC Trust and the director general.

“ITN, ITV and Sky ignored us, yet they too have an obligation to be objective and impartial. Opinion polls regularly find that one fifth of the population describe themselves as republican, yet that was not at all reflected in the coverage of the royal wedding.”

Right now Parliament is currently investigating ties between politicians and the press. Prime Minister David Cameron made it clear that this inquiry will not just look into News of the World and other News Corp. subsidiaries, but all of British media, including the BBC. Cameron said the BBC’s near-monopoly of UK broadcasting is worth looking into and having an open discussion about.

However reluctant some MPs may be to investigate News Corp. due to their own personal ties to Murdoch’s company, can you imagine how skittish they would be to even consider expanding the inquiry to the royal family’s influence over the press?

Here’s one key similarity between the Murdoch empire and the royal family: both are groups of unelected officials that wield power over the press and can influence media narratives. Politicians fear both, and up until recently, neither came under much political scrutiny.

As much as pundits in this country would like to complain about media censorship, take heart in the fact that dissent is not actively stifled in such a calculated, devious manner. Jon Stewart and Stephen Colbert do a lot more than just mock politicians speaking in the Capitol, they mock them to their faces. While interviewing the leader of the free world on a basic cable comedy show, Stewart ribbed President Obama for using the politically-toxic phrase “heckuva job” to talk about his economic advisors.

Of all the arguments you can make for banning/limiting/restricting satire, none of them seem to particularly persuasive. Satire has existed in many different forms. Nations that profess to be free should not be in the business of deciding what can and cannot be used to make fun of those in power.

Rather than ending with a satisfying conclusion summing up the main points of my argument, I’ll just leave you with my favorite piece of British political and media satire. MPs might want to relax and have a sense of humor about themselves. Just don’t have things getting silly.