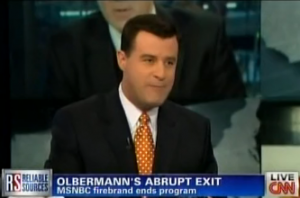 The ongoing controversy regarding Keith Olbermann‘s abrupt exit from MSNBC was the main topic of discussion today on CNN‘s Reliable Sources. Columnist for the Baltimore Sun, David Zurawik and former MSNBC anchor David Shuster not only debated the merits of Olbermann as a television host, but also the journalistic standards of both Fox News and MSNBC.

Zurawik argued that despite Olbermann considering himself to be doing work similar to that of Edward R. Murrow, he was actually more in line with Joe McCarthy given that he alleged Olbermann had a habit of attempting to assassinate people’s character without any facts. Shuster strongly defended Olbermann as a poetic and passionate voice for the left who will sorely be missed until he resurfaces. From there, Zurawik predicted that Rachel Maddow and everyone else on MSNBC will immediately begin to dial it back as NBC news tries to restore some journalistic standards to MSNBC.

That suggestion however got Shuster very excited as he then echoed the repeated controversial claims that some have been inspired by Glenn Beck to carry out acts of violence and asserted:

“There are no journalistic standards on many of these shows on Fox News, with the exception of a couple of news shows, Bill O’Reilly, Sean Hannity, Glenn Beck, they don’t even attempt to subscribe to the journalistic principles that were attempted throughout the MSNBC schedule.”

Earlier, Zurawik was at least eager to defend O’Reilly and unlink him from any potential ties to violence:

Shuster’s fearless critique of fellow cable newsers surely reminds his fans why they liked him, and with these attacks on Fox and being finished with MSNBC, might his next appearance on CNN be on a more permanent basis?