No, Julia Louis-Dreyfus’ Character In Veep Is Definitely Not Based On Sarah Palin
Video

No, Julia Louis-Dreyfus’ Character In Veep Is Definitely Not Based On Sarah Palin 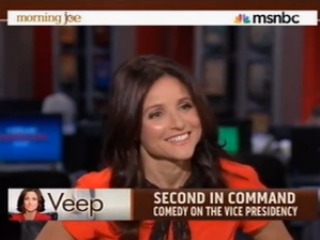 Actress Julia Louis-Dreyfus chatted with Morning Joe hosts Joe Scarborough and Mika Brzezinski, telling them about her upcoming HBO series Veep and sharing how much she hated her time at Saturday Night Live (hint: it was a lot). Frequent Morning Joe panelist Donny Deutsch was also on hand to discuss desirable timeslots.

She also poked fun at the position of vice president and clarified that, no, her character is not based on a certain bespectacled former VP candidate:

“And by the way,” Scarborough told viewers, “if you’re at home thinking about sending us Tweets about how this is a takeoff on Sarah Palin, Joe Biden, or anybody, you know what? Go back to your mother’s basement and relax. It’s not.” I’ll bring the Cheetos, guys. You bring the druid costumes and Mountain Dew.

“You’re not making fun of anybody,” he continued, “but you are making fun of a position that even Joe Biden sometimes will say to us, ‘What am i doing here?'”

“I would say,” Louis-Dreyfus replied, “there is no politician in Washington who aspires to be the vice presidency. Right? And so that makes it just a delicious, fun thing to do. I have to say it is absolute — just to go to your point, it’s not a parody of any one specific person. Because I’m getting asked that question a lot. But it’s all about political behavior.”

“It’s a degrading position in so many ways,” said Scarborough. “I remember – i don’t know if you knew this or not, but I was in Congress as a young man. […] But a guy comes to me, and I always say to people, ‘What do you want to be at the end? Give me the position I want to be and we’ll back up from there and I’ll tell you how to get there.’ And he goes, ‘One day, I’d like to be vice president.’ […] And i was like, ‘next appointment.’ Nobody wants to be vice president.”

She also revealed that not only will viewers never get to see the show’s President, they’ll also never know which party they’re a part of.

Louis-Dreyfus later shared that she and Seinfeld creator / Curb Your Enthusiasm curmudgeon Larry David bonded over their mutual spiraling depression at SNL.

‘Twas a fun interview, guys. Check it out, via MSNBC: