No, The Actual Libertarian Movement Didn’t ‘Go Nuts’ — It’s Just The One Inside Bill Maher’s Head

No, The Actual Libertarian Movement Didn’t ‘Go Nuts’ — It’s Just The One Inside Bill Maher’s Head 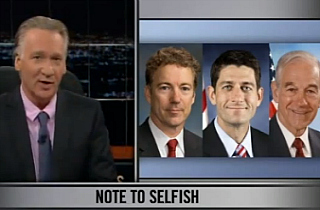 During his HBO show last Friday, Bill Maher dedicated four minutes to bashing libertarians for having “ruined libertarianism.” The comedian lamented that even though he himself once identified as a libertarian, the movement has “morphed into this creepy obsession with free-market capitalism based on an Ayn Rand novel called Atlas Shrugged.”

“I didn’t go nuts; this movement did,” he concluded before launching into a series of cartoonishly reductive descriptions of what he thinks are the ultimate libertarian ends.

All in all, Maher’s rant was actually pretty funny. Despite stereotypes to the contrary, we libertarians do love a good send-up — from Parks and Recreation‘s parodic anti-government hero Ron Swanson to a mock tourism advertisement for Somalia, the “libertarian paradise.” But throughout all the libertarian bashing, Maher showed his hand a bit: Despite once calling himself a libertarian, he revealed that he really does not have a grasp on what the movement/ideology actually represents.

For starters, the fact that he somehow believes libertarianism was ever a movement not predicated on a belief in free market economics is astonishing. The ideology never “morphed” into a free-market “obsession,” as he believes. In fact, the study of markets has always been a fundamental part of the movement, from the Austrian school of economics (F.A. Hayek, Ludwig von Mises) to the Chicago school (Milton Friedman, Gary Becker).

When Maher declared himself a “libertarian” back in 2001, Salon declared it a “joke,” noting that only a handful of his beliefs (specifically on social issues) overlapped with libertarianism. His staunch support for the expansion of government over guns, education, business, etc., were all in direct opposition to what libertarians generally believe — and yet, somehow, he bizarrely believes to this day that the movement left him.

Ultimately, it seems what Maher thought “libertarian” meant is actually what “liberal” is supposed to mean. American liberals claim to support the social issues and civil liberties causes he extols, yet they never fully commit when in power. Clearly Maher was never a libertarian; just a staunch liberal.

As Reason‘s Nick Gillespie notes: “For better or worse, a Venn diagram of Maher and libertarianism is going to show a huge amount of overlap on things.” And that’s a welcome fact. Libertarians and honest liberals will always get along on civil liberties; but we’ll just have to respectfully disagree on economics.

As for the Ayn Rand jokes: What a cheap way to broad stroke a whole movement. But Maher should know better: Ayn Rand is not the be-all-end-all for libertarians. Even she hated libertarians, describing them as “hippies” and “anarchists,” while blasting the movement’s inability to stick to her absolutist mentality on a variety of issues. Today, many of her most devoted acolytes are war-hawks who shrug the “libertarian” association.

While it’s safe to say a plurality of libertarians read Atlas Shrugged and became introduced to the concept of limited government via her prose, there are plenty of us who don’t invoke her name in every conversation and aren’t the biggest fans of her obsession with the ubermensch. Her work is a solid introduction, but by no means a bible.

On a related note, another misunderstanding of Maher’s: Rep. Paul Ryan (R-WI) is not and never has been a part of the libertarian movement. Reason magazine regularly pans his budget proposals that pay lip service to fiscal restraint, but really only cut the rate of increase and don’t balance the budget anywhere in the near future. He is also an outspoken social conservative, unafraid to use legislation to back that up. And during the Bush years, Ryan was a proponent of the bailouts, TARP, an expanded warfare state, and Medicare Part D.

At one point during his monologue, Maher painted a dystopian vision in which entitlements are eviscerated, “human skeletons shit in the river,” and pollution is rampant. What a goofy way to invoke the most extreme possible goals for his strawman version of libertarianism. Opposition to expansive government social programs does not mean total anarchy or zero regulations. The left’s common tactic is to paint libertarians as people who want the poor to suffer, the air to fill with smog, and the wealthy to cackle their way to bank — but, in reality, we just believe the economy functions better with a lighter touch.

We do have our share of thoughtful radicals, but the majority of libertarians are generally pragmatic when it comes to policy. For instance, many of us believe pollution controls are necessary in situations where the market cannot effectively produce the best outcome. Either way, painting libertarians as dark-hearted souls wanting to revert mankind into some Thunderdome-like anarchic existence is just as silly as saying liberals’ ultimate goal is a barren wasteland full of Stalin-esque labor camps and thought police.

That being said, there are plenty of crazies who would surely like to be leaders of the movement — the frightening Alex Jones, for instance — but, by and large, this is an intellectual movement fueled by all sorts of creative thinkers.

And that’s precisely why any criticism of libertarianism that only includes the low-hanging fruit while excluding the intellectual heavyweights is disappointingly lazy.

You can’t truly have a conversation about today’s libertarian movement without mentioning Reason magazine. Led by Gillespie (once a guest of Maher’s) and Matt Welch, the largest libertarian publication regularly churns out devastating critiques of police abuse, exposes the horrific injustices from the War on Drugs, and repeatedly criticizes the foreign policy blunders of both Republicans and Democrats.

You also can’t neglect the Institute for Justice, a non-profit law firm that fights on behalf of small business owners in impoverished communities who dare take on the behemoth local bureaucracies designed to keep them from pursuing their dreams. They even once battled Maher’s nemesis Donald Trump when he tried to use the government to strong-arm an old woman into selling her home.

There are also writers like the Atlantic‘s Conor Friedersdorf and civil libertarian Glenn Greenwald, both of whom cared about drone strikes long before the issue became a general talking point among the anti-Obama right; and long before Maher himself came around to his belated opposition to the warfare state.

Over at the Huffington Post, libertarian Radley Balko does more to fight the militarization of American police than any progressive writer on the same beat. His reporting pretty much single-handedly got a victim of the drug war off death row.

Maher’s contribution to the fight against prohibition? Having Zach Galifianakis smoke a “joint” on set.

There’s also the indispensable Cato Institute, a libertarian think-tank that regularly bucks both parties while receiving praise from progressives like Ezra Klein. While conservative organizations like Heritage Foundation and American Enterprise Institute regularly change positions depending on who is in power (RomneyCare / ObamaCare?), Cato remains a principled advocate for reduced government in the boardroom and the bedroom.