No Thrill Up The Leg, But Rep. Joe Walsh Sure Loves To Say Chris Matthews’ Name 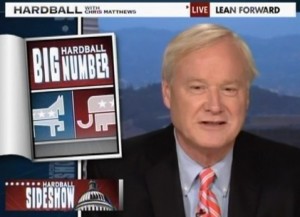 On the heels of yesterday’s Hardball dust-up with Rep. Joe Walsh (R-Il), which saw the Congressman score big with his “thrill up the leg” zinger, but also featured hot Chris Matthews landing body blow after body blow on the lack of substance in the GOP’s “Cap, Cut, and Balance” plan, Matthews followed up tonight by noting the number of times a belligerent Walsh said the host’s name during the interview. It was Matthews’ “Big Number” for Wednesday night, and Roger Maris would be proud.

Tuesday’s Walsh/Matthews battle royale was a classic bit of cable news confrontation to rival Jon Stewart‘s infamous Crossfire segment, with Matthews doggedly pursuing a specific cut in the “Cap, Cut, and Balance” plan, and a defiant Walsh deflecting like a cloaked Romulan Bird-of-Prey. Walsh scored big by quipping that President Obama “doesn’t send a thrill up my leg,” a reference that’s like catnip cut with crack to conservatives. Matthews, though, kept at him, hammering Walsh on the emptiness of “Cap, Cut, and Balance,” and asking Walsh if he would resign when and if a default occurs, and actually does have disastrous consequences.

On tonight’s Hardball, Matthews referenced Walsh’s apparent fondness for his name as a running gag, leading up to the Sideshow segment, in which he cut together just a few of the examples of Walsh saying Matthews’ name, to comical effect. The “Big Number” of times Walsh invoked the Hardball host’s moniker during the eleven minute segment? 61 times: (from MSNBC)