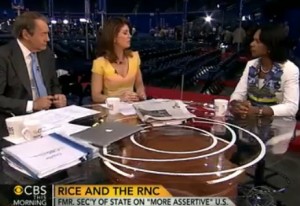 To her credit, former Secretary Rice seemed to realize, early on, that attacking the President on foreign policy was a losing argument, and tried to stick with the vague generalities that have been the Romney campaign’s stock-in-trade. “The mission here is to talk about this country and its leadership. The importance of America to the world. The importance of a clear message from the United States as to what we stand for.”

When Rose pointed out that most people think the President has done a “good job” on foreign policy, Rice wisely avoided the issue, saying “this is about the future,” and that we “shouldn’t look back,” while deploying GOP word croutons like “American exceptionalism” and “leading from in front.”

O’Donnell then showed what a good White House reporter can do. “But if President Obama isn’t doing anything wrong,” she said, “then why change things?”

While most interviewers would have let Rice drift comfortably to Earth on that ejector seat, O’Donnell pressed on. “How is the United States’ voice muted?” she asked.

“Just look at the situation in Syria, for instance,” Sec. Rice responded. “We have a circumstance in which Assad is butchering his people. The Iranians are helping him to do so. The United States seems to be mired in the Security Council. The Russians and the Chinese say no, no, no and we don’t have an answer. When that is the case, it’s a dangerous place.”

“But I think the President agrees with that as well,” O’Donnell countered. “Having covered the White House, the question is whether a President Romney would be willing to advocate and commit American troops, American lives, in a place like Syria right now.”

“No one says we should treat Syria as if it needs American boots on the ground,” Rice replied.

Great. So what the ever-loving-eff are you saying?

“When the President of the United States says ‘Assad must go,’ and then nothing happens to make Assad go, our credibility is at stake, and we have a problem.”

So, the President needs to persuade the Russians to join us in sanctioning Assad?

“You are not going to bring the Russians along,” Secretary Rice said. “Leave the Security Council aside. You don’t need it. What you need is to work with the opposition to arm them in a way that does not undermine the unity of Syria in the future.”

The US is already providing non-lethal aid to the opposition in broad daylight, of course, but Rose pointed out the obvious problem with Rice’s lone, last point. “With respect, how do you know they’re not doing that?” he asked.

Rice hilariously replied that she didn’t “see any evidence” of that, which is a lot like someone complaining that they can’t see any ninjas at the Ninja Parade. You’re not supposed to see any evidence of it.

This was a great interview by Rose and (particularly) O’Donnell, and it should be a model for the next journalist who interviews Mitt Romney. Hopefully, that next interviewer will finally ask Romney why he opposed a raid into Pakistan to get bin Laden, and whether or not he still needs to check with his team of lawyers before deciding if he should attack Iran.

Here’s the video, from CBS News: