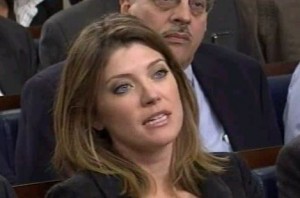 To the untrained eye it might seem that Norah O’Donnell of CBS should be buying a beer for White House Press Secretary Jay Carney right now to make up for her hardcore follow-up questioning at this afternoon’s press briefing on how the United States would be reacting to the attempted assassination of Adel A. Al-Jubeir, the Saudi Arabian Ambassador to the United States. Mediaite’s own White House reporter Tommy Christopher assures me this kind of questioning is routine at White House briefings.

A clearly reluctant Carney tried his best to give answers to questions that O’Donnell had every right to ask, but her persistence in following up led to Carney just saying the word “pressure” a bunch of times, bringing up the rarely-heard combo of “unilateral, bilateral, and trilateral” in the same sentence, and trying to talk his way out of questions he either didn’t have — or couldn’t give –the answers to.

O’Donnell wanted to know how the White House was going to rally the world against Iran. Carney said, essentially, that isolation and pressure would continue, and possibly be ratcheted up. He also intimated that the U.S. might not have to do too much, as many countries have many ambassadors who could have been the target of Iran’s plan.

“I think the fact that it was an attempted assassination of a protected diplomat will be, and is, a matter of great concern for nations around the world,” Carney said. “This is a flagrant violation of international law. And we don’t believe that we’re going to have any difficulty in persuading other nations to agree with us that this is quite a serious, serious matter.”

O’Donnell’s inquiries were obvious follow-ups to questions that Carney wasn’t answering, but there may be more bubbling beneath the surface as far as how the U.S. might deal with Iran. Carney, for instance, is walking a very precarious line — it was a Saudi Ambassador on U.S. soil. Having the Saudis take the lead here might be the best way of dealing with this particular incident. After all, George W. Bush coined the “axis of evil” term almost 10 years ago, grouping Iraq, Iran, and North Korea together in the designation. For a decade, at least, the United States has put it out there that Iran is a country to be watched. The U.S. doesn’t need to really ramp up the rhetoric on this one: it’s been said that Iran is evil, their government was just exposed as having a role in an assassination attempt, and now the world is seeing it play out.

It’s like if you were playing a basketball game in your driveway, and some guy from the next town over — who you’ve told your friends you don’t like for a while — drove up, got out of his car, and tried to punch one of the guys you were playing with. Yes, it’s your driveway, but the guy who almost got punched should probably take the lead on this one. You can just stand behind him, point, and tell everyone, “I told you that guy was a dick.”

Of course, this is all guesswork, based on the few answers Carney actually gave. If one thing is certain, it’s that opinions on this incident, and how America should react, will be wide-ranging and coming from every corner. Kudos to O’Donnell for trying to get what she could out of Carney, but when it’s actually revealed what the administration has planned with Iran, she’ll likely learn it at the same time everyone else does.