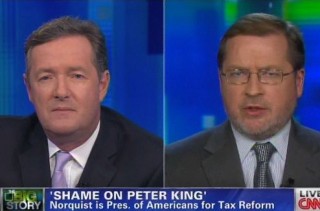 During a rather tense interview with CNN’s Piers Morgan this evening, conservative activist Grover Norquist blasted the various prominent Republican lawmakers who have expressed a willingness to break his long-standing anti-tax pledge in the name of achieving a compromise to avoid the “fiscal cliff.” In particular, Norquist took a shot at Rep. Peter King (R-NY), accusing the congressman of trying to “weasel” out of a career-long commitment to the pledge.

Morgan came out swinging at Norquist, telling him that “everyone is laughing at you from afar,” because while “the American public is sick and tired of all the games going on, there you are — a very bright guy — still saying ‘a pledge is a pledge is a pledge, it cannot be broken,’ when many of your own party is saying, ‘You know what? It doesn’t make sense to just have this irresolute position anymore.”

One of those Republicans is Rep. King, who told NBC that Norquist’s pledge is easily dismissed because “a pledge you signed 20 years ago” is only good for that particular time.

Norquist fired back with a pointed stab at King: “The pledge is not for life … [but] Peter King, who tried to weasel out of it, shame on him as the New York Sun said today. I hope his wife understands that commitments last a little longer than two years or something.”

“Whoa, whoa, whoa,” Morgan shouted. “Hang on. That was a bit below the belt, Grover.”

“The commitment for the pledge, as Peter King well knows when he signed, is that as long as you’re in Congress you will rein in spending and reform government not raise taxes,” Norquist responded. “It’s only as long as you’re in the House or Senate. If he stayed too long, that’s his problem. But you don’t tell the bank, ‘Oh, the mortgage. Wasn’t that a long time ago?'”

He concluded: “If you make a commitment, you keep it.”