Not An Onion Spoof: Newt Gingrich’s Education Plan Is To Fire Janitors And Replace Them With Kids 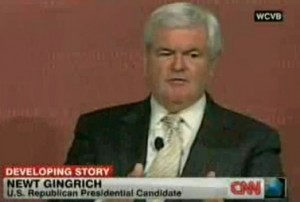 Former House Speaker Newt Gingrich told a crowd on Friday that the solution to income inequality is to fire school janitors, and replace them with children. I am not making this up, and it gets worse. He’s not talking about junior high or high school kids, he’s talking about “9 to 14 year-olds.”

He suggests that these nine year-olds replace “union janitors” in poor neighborhoods, and that the kids work under a single “master janitor.”

Gingrich’s remarks, made during a Q&A at Harvard’s Kennedy School on Friday, are comically offensive on so many levels, it’s hard to find words. Lest you think I’m exaggerating, here are the direct quotes, from Politico:

“This is something that no liberal wants to deal with,” Gingrich said. “Core policies of protecting unionization and bureaucratization against children in the poorest neighborhoods, crippling them by putting them in schools that fail has done more to create income inequality in the United States than any other single policy. It is tragic what we do in the poorest neighborhoods, entrapping children in, first of all, child laws, which are truly stupid.

“You say to somebody, you shouldn’t go to work before you’re what, 14, 16 years of age, fine. You’re totally poor. You’re in a school that is failing with a teacher that is failing. I’ve tried for years to have a very simple model,” he said. “Most of these schools ought to get rid of the unionized janitors, have one master janitor and pay local students to take care of the school. The kids would actually do work, they would have cash, they would have pride in the schools, they’d begin the process of rising.”

“They all learned how to make money at a very early age,” he said. “What do we say to poor kids in poor neighborhoods? Don’t do it. Remember all that stuff about don’t get a hamburger flipping job? The worst possible advice you could give to poor children. Get any job that teaches you to show up on Monday. Get any job that teaches you to stay all day even if you are in a fight with your girlfriend. The whole process of making work worthwhile is central.”

There can’t possibly be people with whom this resonates, can there? Even the most rabidly anti-union conservative has to agree that we shouldn’t exploit child labor, even if those children are someone else’s, even if they’re the children of those fat-cat union janitors, right? Surely we can all agree that kids aren’t failing in school because they lack the opportunity to clean toilets.

Words completely fail me here. If you ever doubted who it is that’s using the mustard gas in the “class warfare” that Republicans are always bleating about, this ought to seal the deal. Child labor laws (Newt called them “child laws;” I hope he was only referring to labor laws) are “stupid?” Poor kids should throw poor adults out of work, and answer to a “master janitor?” He’s not even hiding it, not even a little!

Gingrich’s stance here is about as extreme as it gets, but it is yet another indication that conservatism has morphed into unapologetic regressive-ism.

We’ll see if this hurts his standing with Republican voters, but I won’t hold my breath. There seems to be about 25% or so of them who care only about one issue: Is this guy not Mitt Romney?

Here’s a clip of some of Gingrich’s remarks, from CNN International: