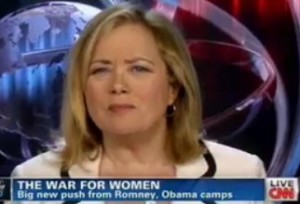 On Wednesday night, CNN contributor and Democratic strategist Hilary Rosen created what has to be the greatest media mountain-to-molehill ratio in recent memory, simply by telling the truth. For her trouble, she has been gay-bashed by the Catholic League, become the Republican Party’s bloody shirt in defense of the War On Women (the existence of which Rosen, ironically, denies), and been excoriated by the very highest officials on her own political side. While many agree this is stupid, Republican overplaying of this hand could, and should, backfire on them.

In case you missed it, Rosen started out her Cable News Panel Hit Heard ‘Round The World by saying we should “get rid of this word War On Women,” and said she agreed with Mitt Romney that “ultimately women care more about the economic well-being of their families and the like.” (As far as that goes, I don’t think it’s a foregone conclusion that women actually care more about economic well-being than they do about anti-choice, anti-contraception, anti-equal pay, vagina-probing policies, since there is significant overlap between them. But, I digress.)

Rosen went on to explain that Mitt Romney “doesn’t connect on that issue either. What you have is Mitt Romney running around the country saying, well, you know, my wife tells me that what women really care about are economic issues, and when I listen to my wife, that’s what I’m hearing. Guess what, his wife has actually never worked a day in her life. She’s never really dealt with the kinds of economic issues that a majority of the women in this country are facing in terms of how do we feed our kids, how do we send them to school and how do we — why do we worry about their future.”

This, of course, got shortened to “Ann Romney has never worked a day in her life,” and the even shorter “being a mom isn’t work.”

Outrage ensued at a ridiculous pace. As of this writing, there have been 31 Mediaite posts on the subject in just two days. To put that into perspective, there were only 23 post on the Trayvon Martin killing in the first two weekdays following the release of the 911 tapes.

Rosen was forced to apologize, but she really shouldn’t have. Being a mom (stay-at-home or not) is hard work for most people, but the parts of it that are hard work, figuring out how to feed, clothe, and shelter your kids, how to educate them, how to keep them safe in a dangerous world, are things that don’t exist when you’ve got $250 million in the bank. When you’ve got that kind of cheddar, even the chores associated with parenting (stay-at-home or not) cease to count as work. If you’ve got a quarter-billion in the bank and you’re still doing your own laundry, that’s a hobby.

But absent the pressures of everyday life for the average American parent, the actual raising of children, being there for them, loving them, whether it’s full-time stay-at-home style or struggling to fit it in with a job, isn’t work. It’s a privilege, and I think most Americans (excepting the entrenched culture warriors who would vote for any Republican with a pulse), when faced with the offensive notion that Ann Romney’s struggles as a multi-hundred-millionaire mom somehow mirrors their own, will be more put-off than sympathetic.

That’s why the President and his team’s handling of this has been so wrong-headed. President Obama cast Rosen’s remarks as an attack on Ann Romney, but it wasn’t. It was an attack on Mitt Romney for fixing his entire policy focus on women around whatever he and his ultra-privileged wife banter about while they’re trotting around on dressage horses. If he told a crowd that he was taking her policy advice on something else that she knows nothing about, say, foreign policy, no one would have any problem with this sort of critique.

Even if the Republicans manage to hoodwink some stay-at-home moms into thinking they’re workmates of Ann Romney, this episode could still be a huge net loss for an already Gyno-American-challenged Mitt Romney campaign. Nearly 80% of American women with children are part of the workforce, and have to do everything a stay-at-home mom does, in addition to earning a paycheck. A significant number of them probably wish Mitt Romney and his party would follow his wife’s advice and “Respect women and all those choices that they make.”