Not This Again: Fox Newsers Confuse Obama and Osama
video

Not This Again: Fox Newsers Confuse Obama and Osama 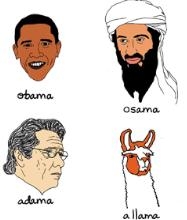 Remember during the lead-up to the 2008 presidential election, when Pres. Barack Obama didn’t’ have nearly the name recognition he has now?

He has a somewhat difficult name, and it sounds a bit like Osama bin Laden. There were slips of the tongue then…and now that confusion is back this week on Fox News.

Earlier this week, Glenn Beck was ranting about the terrorists, and dropped this line: “You’d either have to be living in a cave in Afghanistan next to Obama, and you can’t hear anything that Osama is saying because of the goats…”

And this morning, Geraldo Rivera said this on Fox & Friends: “I am concerned about not listening to the generals. I said during the surge, first of all I gave the benefit of the doubt to George W. Bush during the surge, I give the benefit of the doubt to this President, Osama bin…” He then immediately caught the mistake, stopped talking and put his head in his hands.

Look, there’s no implication here that either of these were intentional. Beck was really caught up in the speech (as you’ll see below), and this line came just before he started getting…emotional. Rivera clearly meant nothing by it. And it’s not a Fox News problem by any stretch – here’s a good look at all the mistakes made, on networks from NBC to CNN, when it comes to Obama/Osama confusion.

But still? He’s been President for almost a year now. Let’s all try to really concentrate on that one letter after the “O”.

Here are the clips: