‘Not What We Agreed To’: Ari Emanuel Objects To Brian Williams’ ‘Aggressive’ Interview, Sends Legal Letter To NBC
video

‘Not What We Agreed To’: Ari Emanuel Objects To Brian Williams’ ‘Aggressive’ Interview, Sends Legal Letter To NBC 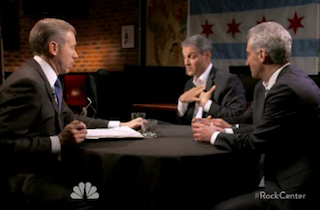 Ari Emanuel is not pleased with Brian Williams. After sitting down for an interview for Rock Center alongside his brothers — Rahm, the mayor of Chicago, and Ezekiel, a bioethicist — Ari took issue with Williams’ style of of questioning. So much so, that Ari sent a legal letter to NBC.

The New York Post first reported the story, citing a source saying Williams was acting “like it was for Meet the Press.” The interview, pegged around Ezekiel’s upcoming book, Brothers Emanuel: A Memoir of an American Family, wasn’t what they’d agreed to, the letter asserted:

A source told us that the letter said, ‘This was not what we agreed to. He felt like he did the interview in good faith and he was irritated.”

Specifically, Ari took issue with Williams’ apparently aggressive interviewing — “asking the brothers about their connection to Israel and Ari’s reputation as an ultra-aggressive Hollywood agent, among other things” — when they were expecting a more lighthearted chat.

Furthermore, the Post reported that Ari had a “heated confrontation” with NBC News chief Steve Burke, but “sources close to NBC and Ari’s agency, WME,” denied it. NBC also said the reaction from Ari “in no influenced” the final broadcast, which aired Friday.

The Hollywood Reporter noted, though, that Williams’ clip did include a nod to their aversion to being challenged:

In a narration, Williams explained in the clip (9:07 below), “The Emanuel brothers do not suffer from self-doubt, at least not outwardly, they do not suffer fools gladly and, as we learned, they don’t love being challenged or prodded. Ari’s facial expressions speak volumes when the conversation turned to his scorched earth reputation in Hollywood…”

Other than that, the segment is generally pleasant. NBC offered a statement saying, “We hope viewers saw the interview as a lively conversation with three famously colorful brothers who embody a great American story of success.”