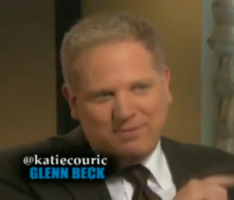 Word has gotten out that on tonight’s episode of @katiecouric, Katie Couric’s new web-only show, Glenn Beck will declare that McCain would have been worse than Obama. Newsrooms around the country have flung stacks of paper in the air in disbelief, wondering how this could be. Before the show has even aired, the media narrative has emerged that this is some kind of cunning, headline-grabbing ploy by Beck. CBS, for its part, has effectively used the ‘controversy’ as a marketing tool, plugging it on their website.

It’s a catchy angle, but here’s the thing; if you go back and look at what he’s said, Beck has never really liked John McCain.

On the prospect of voting for McCain: “You close your eyes, you pull the lever and you cringe when you think back about it.” Glenn Beck, 7/29/08.

During the 2008 Presidential Election, back when Beck was an HLN anchor, he was a Romney man. When it became clear that Romney didn’t have a shot, he never really cottoned up to McCain. When Wolf Blitzer interviewed him in February, shortly after Romney endorsed McCain, Beck said that he was “a little disappointed” by the endorsement, and he wouldn’t even answer the question of whether a good conservative should endorse McCain or Clinton/Obama when it came down to an election.

That wasn’t just a case of post-letdown blues. On July 29th, Beck wrote a column for CNN.com titled “Still looking for a candidate I can support,” in which he essentially blew off McCain and hinted that a third-party protest vote might be the best option for conservatives. “[McCain is] massively frustrating on far too many things to make voting for him anything other than an excruciating-eating-a-spider-Fear-Factor type of experience. You close your eyes, you pull the lever and you cringe when you think back about it,” he wrote.

As late as October 27th, the eve of the election, Beck still hadn’t fallen into the McCain camp; when he interviewed Romney on his show, he called Obama openly “Marxist,” but pointedly had nothing good to say about McCain.


Here’s a full transcript from the revealing interview with then-CNN cohort Wolf Blitzer on February 18, 2008, which reporters on the popular “Glenn Beck” beat should probably read:

BLITZER: You haven’t jumped aboard the McCain bandwagon, yet, Glenn…

BLITZER: Is that what you’re saying?

BECK: Wolf, I’ve taken about 1,400 looks at John McCain. Really not that interested. Has he got anything new?

BLITZER: Well, what’s the alternative? Let’s say it comes down to McCain versus Barack Obama or Hillary Clinton. What does a good conservative do?

BECK: You know, I’ve been really wrestling with this and I — and a lot of people don’t believe my answer, but it’s true. I don’t know what I’m going to do, at this point. I don’t think I’ll know until I close that curtain, quite honestly. I am tired of — I used to be a guy who said well, it’s better than the alternative.

But you know what? We have spent so much time — on both sides of the aisle — saying well, this is better than that. Well, at some point, these keep moving so close together that this becomes that. And then it doesn’t make a difference. And I think we’re almost there.

BLITZER: Well, were you disappointed that Romney decided yesterday to formally endorse McCain?

BECK: No, not disappointed, just — well, I guess — yes, maybe a little disappointed because I don’t — I don’t understand it. It could be that, you know, the best scenario that I have in my head — and I don’t know. I don’t know the governor. I didn’t talk to the governor about his decisions. He doesn’t consult me.

BLITZER: And so that’s encouraging on that, on the spending…

BLITZER: … on the spending level.

Yes. I mean maybe — maybe that — because that’s, you know, Romney’s gift is knowing how to work with the economy and being, you know, somebody who can turn things around. And maybe that’s why he threw his support there.

I was disappointed on the other option which, I think is, you know, look at me, I’m a good little elephant — because the Republicans all stand in line. It seems like oh, it’s your turn to run for president.

BLITZER: How important would be McCain’s vice presidential running mate? The conventional wisdom over the years is nobody votes for a vice president, they vote for president. How significant, though, would McCain’s pick be?

BECK: I think it depends. Usually, I don’t really care about the vice president. But with George Bush, it did make a difference with a lot of Americans. It made a difference to me that it was Dick Cheney.

But it would be — it would have to be the right vice president. For instance, if he decided, you know, well, the economy is really important and, you know, I’ve read Greenspan’s book, I need somebody who’s better on the economy, so I’m going to go for Romney, I wouldn’t buy it because I don’t think he likes Mitt Romney.

And so I don’t — I don’t see him saying hey, Mitt, come on into the office here, I need to talk to you about the economy. If I believe that the two have a real relationship and he is offsetting McCain and would be able to say, wait a minute, Mr. President, this is not the direction to go, then maybe it would make a difference.

But, in the end, the president has to make decisions quickly. He has to make them from his gut. And John McCain’s gut and my gut just don’t — don’t line up.