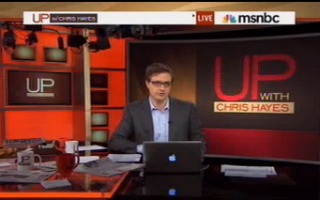 On Saturday, MSNBC’s Chris Hayes delved deeper into a series of emails written by ASG Software Solutions President and CEO Arthur Allen to his employees on the topic of Mitt Romney.

Specifically, Allen encouraged those who worked for him to support the Republican candidate with donations to his website, urging them to contribute to the Romney campaign “up to the maximum of $2,500 per person.” In addition, he encouraged his employees to contact their own friends and relatives and urge them to support Romney as well.

“ASG,” Allen wrote, “like many other companies, is still struggling, even after four years. We need to elect a fiscally conservative president and vice-president and stop this ridiculous government spending.” The letter concludes by asking employees to please “help ASG and yourself” by contributing to the Romney/Ryan campaign.

In another email, Allen had asked his employees to defer “some of all” of their salaries until December in order to help the company make a 15 million dollar interest payment. This provides a contrast to earlier comments Allen had made regarding use of a private jet costing something around 50 million dollars.

Hayes then reminded viewers that, in a teleconference held back in June, Romney himself encouraged others to tell their employees how to vote, encouraging them to explain what would be in the “best interest of your enterprise” and adding that there is “nothing illegal” about talking to employees about what would be best for the company.