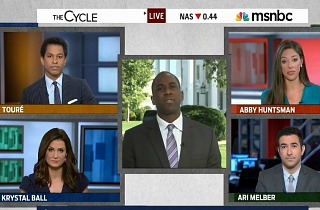 Minutes after leaving a background briefing on the implementation of the Affordable Care Act in the White House, MSNBC on-air political analyst Perry Bacon joined the hosts of The Cycle to share what he learned. Bacon said that both the ACA’s website and phone banks are not working well, casting doubt on the administration’s belief that enough healthy young people will sign up for the program by December 15 in order to support those who require subsidies.

Touré began the segment by noting that President Barack Obama told the public that they could sign up for the ACA insurance exchanges by phone and not just via the internet. “That is a delivery problem, not necessarily a product problem,” Touré observed.

“First of all, we now have two technical problems,” Bacon began. “The website wasn’t working great and, my understanding from people I talked to is, right now the phone site isn’t working well as well either.”

“When you go on to call and dial in, you are often are told to wait a long time or call back later,” he added. “So, nothing really working perfectly.”

Bacon said that the administration expects a spike in young people to sign up for the program after Thanksgiving and prior to December 15. If the phone or websites cannot handle traffic by then, the ACA will have a major problem.

“I was prepared for some glitches but this is a catastrophe,” MSNBC host Krystal Ball said. “Do you think it is a reasonable question to ask whether [Health and Human Services Secretary] Kathleen Sebelius should resign over this massive failure?”

Bacon said that he thought it was unlikely, but he said he anticipated more Democrats coming out and seeking her resignation as a result of the ACA’s initial failures.