Fox & Friends Is Upset That Obama Is Cutting Vacation Short 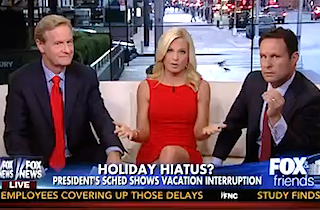 Outrage over President Barack Obama’s annual family vacation to Martha’s Vineyard has become a familiar trope on Fox News. But on this morning’s installment of Fox & Friends, the hosts went the other way, expressing dismay over the fact that the president has decided to cut his August getaway short in order to return to the White House and address the growing border crisis.

“Let the speculation begin,” Brian Kilmeade said Thursday morning, “because the president of the United States has now announced that he’s going to be cutting his vacation off by about a week.”

“Yeah, there’s going to be some vacation interruptus,” Steve Doocy added, noting that the White House has only said Obama will be “attending some meetings.” He speculated that it could be the “big unveiling of the executive actions to ‘amnetize'” large numbers of undocumented immigrants.

Anna Kooiman said Obama could be holding fundraisers or playing golf, two activities that are typically met with derision on Fox, but instead he’s actually going to be in Washington trying to get some work done.

“If you’re going to do something major, why do it before Labor Day?” Kilmeade asked, before introducing a survey on the Fox & Friends website page that is asking people to guess why Obama is coming home early:

The most popular response reads, “I don’t care. I just want him out of office…and into prison where he belongs.”