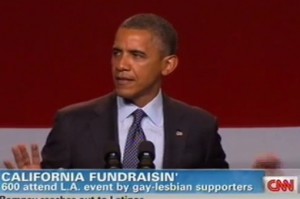 I’ve long argued that the reason President Obama‘s gaffes don’t get any traction is that they’re just not funny, and some of them aren’t really even gaffes. Unlike Vice President Joe Biden, the President just doesn’t give good gaffe. He made up for that, and then some, at a fundraiser in San Francisco Wednesday night when, as he thanked supporter Ellen DeGeneres, he delivered a line that probably looked innocent enough on paper, but got some salacious laughs from the crowd.

Mediaite‘s recent list of the Biggest Obama Gaffes Caught On Tape was nothing if not thorough, but with few exceptions, none of them really succeed at bringing the laugh. Yes, the “We built the intercontinental railroad” quote (which I hadn’t seen before) was hilarious, but that’s about it. “57 states” is the favorite among conservatives, but he was clearly referring to the 57 primary contests, including various territories. Conservatives wrung whatever humor there was out of that gaffe by using it to try and prove Obama was a secret Muslim.

However, his warmup at Thursday night’s LGBT gala was unquestionably funny. While thanking Ellen DeGeneres, the President said that the talk show host “claims Michelle didn’t go all the way down,” to laughter from the crowd, and a pregnant pause from the President.

The Dallas Morning News’ Todd Gillman seemed to think the joke was intentional, writing this in his pool report:

“Michelle outdoes me in pushups as well,” he said, after saying that she’s taken some criticism on her technique “because she doesn’t go all the way down” – a line that he let hang, naughtily, provoking laughter from the crowd.

If you look at the President’s face, though, he seems to be realizing that the line he thought looked so innocent on paper sounded different when spoken aloud. I could be wrong, but I don’t think the President of the United States intentionally made an oral sex joke about Ellen DeGeneres and his wife. That would be badass, but I don’t think he did.