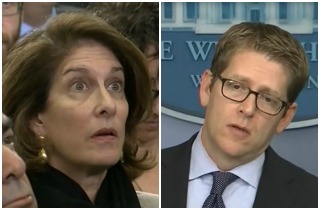 On Tuesday, the White House announced that it was tapping former acting Office of Management and Budget (OMB) Director Jeff Zients to head the team overseeing the repairs on the Affordable Care Act health insurance exchange website. NPR Reporter Mara Liasson probed White House Press Sec. Jay Carney about whether he would be providing regular updates on those repairs as they did for disasters like the Deep Horizon oil spill in 2010.

“In the past when you had a natural disaster like the oil spill, generally there’s somebody in charge,” Liasson began. “And I guess Jeff Zients is going to be that person.”

“Will he be taking over some kind of a briefing role where he answers the questions?” she asked.

“I think he’s providing management advice and consultation,” Carney replied. “but for more details about his role, because he’s being brought on by H.H.S., I’d refer to you H.H.S.”

“I don’t think this this is a man-made – I mean, this is not a natural disaster,” he clarified.

“I know that,” Liasson added. “One of the frustrations has been hard to get information about exactly what went wrong and what is being done to fix it, and there hasn’t been a daily update from somebody who’s well versed in the technical aspect of this.”

Carney said that he had no further details about what Zients role would be.