NRA Marks One Week Since Sandy Hook With Crocodile Tears, Blame For Videogames And Movies 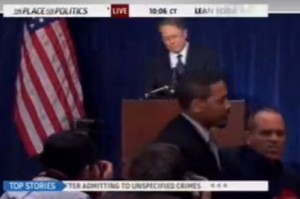 Exactly one week after news organizations first began reporting on the unfolding tragedy at Sandy Hook Elementary School in Newtown, Connecticut, National Rifle Association executive vice president Wayne LaPierre held a press conference, at which he tried to emote about the tragedy, while blaming it on videogames, movies, and President Obama. The “meaningful contribution” the organization promised, to “help make sure this never happens again,” consisted entirely of placing armed security in every school in America, and enacting zero gun control laws.

LaPierre refused to take questions at the press conference, which was interrupted several times by Code Pink protesters, and set about spending 25 minutes pointing fingers everywhere but at gun laws that allowed the shooter to possess an arsenal capable of causing so much devastation, so quickly.  LaPierre cited videogame violence, Hollywood movies like American Psycho and Natural Born Killers, and President Obama as factors, but zeroed in on armed security as the answer to preventing mass shootings at schools.

There will be time, later, to tick off the litany of factual errors and logical missteps in LaPierre’s speech, such as the notion that a single armed security officer would have stood much of a chance against an assailant with a high-powered assault rifle and two semiautomatic pistols, but for now, it is worth noting that while LaPierre’s reaction was completely predictable, he didn’t have to do it now. He didn’t have to do it today, exactly one week after the nation first began to learn of the tragedy, at this time, when the echoes of a moment of silence in Newtown still hung in the spiritual air. This was an act of defiance, and it will result in punishment for anyone who stands with LaPierre going forward.

LaPierre offered to train school security personnel for free, and urged Congress to put an armed guard at every school, presumably with the proviso that nothing be done to stem the flow of assault weapons and high-capacity ammunition magazines into the market. On a day when they probably would have been better served by remaining silent, the NRA acted in defiant self-preservation. Even if LaPierre had a good argument, this was not the time or manner in which to make it, but his error is compounded by the fact that people can plainly see that shootings like these are made much worse by the availability of weapons that have no other legitimate purpose.

The tagline of LaPierre’s press conference, “The only thing that stops a bad guy with a gun is a good guy with a gun,” contains a kernel of truth. Keeping the bad guy from getting a gun also works pretty well, or, failing that, keeping him from getting a gun that he can fire 200 times a minute. But part of the problem is that LaPierre’s organization has done everything it can to make sure we don’t know who is a “good guy” and who is a “bad guy” when we’re selling guns to them. Even in his simplistic NRA sloganeering, Wayne LaPierre can’t help but expose the weakness of his own beliefs. There are ways to end gun violence, but just as no single law can solve the problem, neither can a single armed guard, not against the portable arsenals that Wayne LaPierre held this press conference to protect, and not in all the places we gather with our treasured children. Wayne LaPierre is perfectly entitled to try and save his own political skin, but he picked the wrong day, and the wrong way, to do it.

Here’s the full press conference, in three parts, from MSNBC. Part One: