NRA President: ‘We Don’t Think’ Our Policies Had Anything To Do With Newtown Shootings 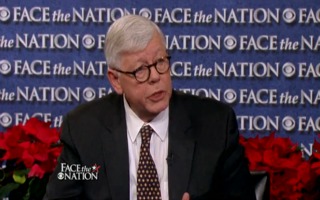 NRA President David Keene appeared on CBS’s Face The Nation Sunday to square off with host Bob Schieffer about the lobby group’s potential responsibility for gun violence in America. According to Keene, there isn’t any.

Schieffer said what he found “odd” about NRA Vice President Wayne LaPierre‘s press conference Friday was that the NRA seems to blame everyone but themselves: “You did not seem to think that your policies have had anything at all to do with this.”

“We don’t think they have,” Keene responded.

Schieffer pressed on, asking, “You see no responsibility?” Keene spoke around the question, instead of answering directly, saying, “We’re living in a country where in the last few decades, as gun ownership has increased, violent crime has fallen.”

Guns aren’t to blame, according to Keene, “evil or crazy” people are. Schieffer attempted to redirect him to the topic at hand, asking why the gun deaths of other industrialized nations are so much lower than the United States if guns don’t matter. Keene disagreed with his statistics and opined that regulating guns does nearly nothing: “That doesn’t prevent killing. It doesn’t prevent mayhem. It doesn’t prevent violent crime.”

Schieffer incredulously asked, “You don’t really believe people armed with baseball bats can somehow kill more people than people armed with guns?” He pressed Keene again on why the NRA was “so against” tightening gun control laws.” Keene eventually told him the group was “willing to debate” the important policy questions but never fully answered the question.