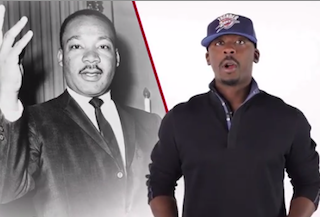 The NRA tends to stay silent in the immediate aftermath of a high-profile shooting incident, but the organization evidently felt enough time had passed since Dr. Martin Luther King, Jr. was shot and killed in 1968 that they could put out the video below connecting the civil rights leader to the push for less restrictive gun laws. To mark today’s holiday, the NRA enlisted its hip, young, black “commentator” Colion Noir to deliver a video message about how much King loved guns.

Noir begins with a message that is unlikely to resonate strongly with the NRA’s many members, saying if King were alive today he would “look at our current president and smile, not because of his politics, but because of what his presence in the White House represents.” After explaining that President Barack Obama would have been “arrested or even beaten for drinking from the wrong water fountain” 50 years ago, he adds, “notwithstanding some of President Obama’s policies on gun control, that’s a hell of a lot of progress if you ask me.”

Quickly, Noir shifts his message to gun control, pointing out the fact that he was granted a concealed handgun license, while historical record shows that King applied for one and was denied. “Let’s not forget, the first forms of gun control were created to keep people like me from having guns,” he says, invoking his shared race with King.

Noir goes on to try to reconcile King’s “non-violent” reputation with his apparent desire to protect himself with a gun. “When Dr. King was denied [the firearm license],” he says, “he did the next best thing and surrounded himself with people with guns.” Presuming to know what King believed, he adds, “In my heart, based on Dr. King’s own actions, I don’t believe that Dr. King would ever advocate leaving a family, or anyone for that matter, defenseless in the face of violent life threatening danger.”

In his role as the most visible civil rights leader of his time, Dr. King knew that he was in danger and evidently took steps to try to protect himself. But even though he “surrounded himself with people with guns,” as Noir explains, it didn’t stop him from being gunned down by his assassin James Earl Ray from across the street while he was standing on the balcony of his hotel room. Noir does not address how a concealed weapons permit would have helped King in that particular situation.

But perhaps the most egregious part of Noir’s video comes when he links historically racist gun control laws to current-day gun control efforts like limiting magazine capacity and strengthening background checks. Proposals like those, which the NRA so vehemently opposes, are not designed to “keep people like me from having guns” as Noir suggests. They are meant to help prevent senseless shootings like the one that took Dr. King’s life far too soon.

For the NRA to co-opt this day of remembrance to promote their message that more guns make Americans safer is beyond tone-deaf — it’s irresponsible and wrong.

Watch video below, via NRA: