NRA’s LaPierre: ‘One of America’s Greatest Threats’ Is a Dishonest Media
video

NRA’s LaPierre: ‘One of America’s Greatest Threats’ Is a Dishonest Media 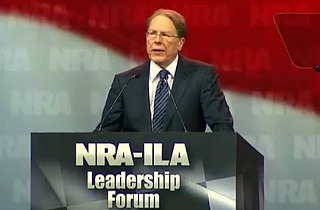 Speaking at the National Rifle Association’s annual meeting in Indianapolis on Friday, NRA CEO Wayne LaPierre took aim at what he said was one of the “greatest threats” facing the nation today: a national news media which he alleged “fails to provide a level playing field.” He added that the press is attempting to force his group into “submission,” but that they would never succeed in that endeavor.

“The political and media elites in this country are lying to us,” the NRA CEO said to applause. “The IRS is now a weapon — a weapon – to punish anyone who disagrees with them. And that means every one of you.”

“Rather than expose government dishonesty and scandal the way they used to, the media elites whitewash it all,” LaPierre asserted. “One of America’s greatest threats is a national news media that fails to provide a level playing field in this country for the truth.”

“Here’s how you know they’re lying,” he continued. “They still call themselves journalists.”

“Do you trust this government really to protect you and your family?” LaPierre asked to a chorus of noes. “We’re on our own. That’s a certainty.”

Watch the clip below via the NRA-ILA Leadership Forum: