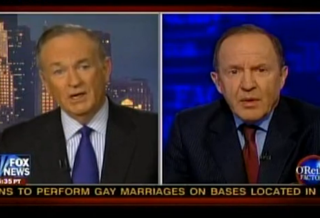 The New York Daily News, among many, is not exactly impressed with the pseudo-candidacy of real estate person Donald Trump, and today made it abundantly clear with a cover calling the mogul a “birther” and “racist” and an accompanying story entitled “Mickey Mouse Donald.” On tonight’s Factor, Bill O’Reilly took publisher Mort Zuckerman to task over the racist allegations, which Zuckerman argued were legitimate stemming from Trump’s birther obsession.

O’Reilly first let Zuckerman explain the larger claim that Trump could never be an effective president, asking why that would be given his success in the business world. “I think that’s a very different kind of thing than the successes he has had in business or whatever,” Zuckerman argued, noting that even that career was “up and down” and that, while he takes “nothing away from his ability to promote himself or his brand,” the presidency requires gubernatorial experience. “You can’t just go there and mouth off,” he noted, while adding as a disclaimer that despite his beliefs, “I don’t personally tell [NYDN writers] what to write or what not to write.”

O’Reilly then shifted to the cover’s racism allegations, and, noting that “I’ve known Donald Trump almost as long as you’ve known him,” O’Reilly had “never seen any racist element about Donald Trump.” Zuckerman agreed and this point, but added that “the issue carries with it certain overtones that I think are really serious,” referring to the birth certificate issue. This answer didn’t satisfy O’Reilly as “you’ve got a check next to racism here,” he noted of the newspaper’s cover. Zuckerman continued to note that he did not see how the issue could arise without race being an issue, arguing, “I don’t think it would’ve gotten traction with any other candidate” and that he lamented it received press at all because “this is not the issue that should be raised at this point.” Ultimately, O’Reilly agrees on that front, highlighting that “I said it was nonsense and I told Trump that to his face,” which concludes the debate on a rather conciliatory note.