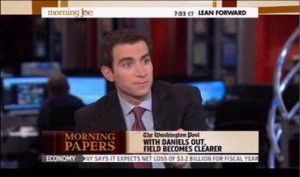 On Monday’s Morning Joe, an ad for newly-minted 2012 GOP presidential candidate Tim Pawlenty (R-MN) was the jumping-off point for a discussion of the slowly-gelling Republican field. When the discussion turned to the rest of the field, though, New York Times columnist Andrew Ross Sorkin accidentally summed up the blessing, and the curse, of the GOP’s 2012 prospects. With “Generic Republican” leading the polls, Sorkin underscored just how generic the party’s most credible candidates are by referencing Pawlenty’s ad during a discussion of former Ambassador John Huntsman.

It wasn’t simply a case of misspeaking, either. After a few minutes of discussion about Huntsman, Sorkin references the Pawlenty ad, and when the panel corrects him, he says, “That was Pawlenty’s ad?”

The blessing, of course, is that if the economy doesn’t improve, all the Republicans have to do is run someone who looks and sounds the part, and they’ve got a decent shot at beating President Obama. The bad news is that the current slate of Republican candidates with general election appeal blend together like, and have all the flavor of, a bowl of Cream of Wheat. Guys like Pawlenty, Huntsman, and Mitt Romney have the crossover appeal to make a game of it in the general election, but lack the necessary ingredients to make it out of the GOP primaries.

Of the three, Pawlenty has the lightest baggage to carry through the primaries. Romney faces the nearly-insurmountable obstacle of Romneycare, while Huntsman’s stint as a Barack Obama-appointed ambassador, a likely advantage in a general election, could hurt him with revved-up primary voters.

Pawlenty’s ad cannily references the dusty-but-persistent teleprompter meme in the opening seconds of the ad, but the spot’s critique of political artifice is quickly undercut by the slick, jittery editing, and the closeup of Pawlenty reciting his lines with Sincerity™. Pawlenty’s bleak messaging won’t play well in a general election, but will likely resonate with the Chicken Little base of the party.

Of course, Pawlenty will have to get past crowd-pleasing underdog Herman Cain, evangelical-skewing Rick Santorum, and the as-yet-undeclared double threat of Sarah Palin and Michele Bachmann, either of whom could mop the floor with Pawlenty in the early states. With movements to draft party favorites like Chris Christie and Paul Ryan making noises, too, Pawlenty’s got a steep climb ahead of him.