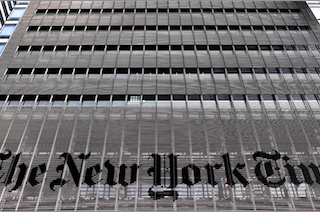 For his weekly “Media Equation” column Monday, The New York Times’ David Carr examined his own newspaper’s current round of buyouts aimed at eliminating 100 positions in the newsroom.

“I work closely with a few longtime employees who are considering the buyouts,” Carr wrote. “The deadline for putting up their hand is Monday, and it seems clear that we will be losing people with many decades of professional experience, journalists with deep sources and remarkable levels of productivity.”

Now, we have learned of at least two major reporters in the Times’ media section who have decided to accept the buyouts and leave the paper.

First, Bill Carter, who covers late night television better than anyone else on the scene (and wrote the widely-read books The Late Shift

and The War for Late Night

Very grateful for warm comments here today; making this move w great reluctance. Hope to stay in the game from new perch. Thanks to all.

“I went through a long process, but I couldn’t square passing up what amounts to the best kind of severance at a newspaper job,” Carter told The Huffington Post. “I love this job and I love the Times. I would never do this under other circumstances. I feel the economic pressure to do this.”

Then, on Tuesday, Christine Haughney, who covers the newspaper and magazine industry for the Times, followed suit:

After 8 years with @nytimes including nearly 3 years writing about my colleagues in the troubled newspaper industry, I am taking a buyout!

Still deciding what I'm going to do after @nytimes. But I'm excited to figure it out!

Over at capitalnewyork.com, reporters Joe Pompeo and Jeremy Barr have a running list of every New York Times reporter that has accepted the buyouts so far.