NY Times’ Nate Silver Explains Why Some Polls Had GOP Bias: It’s ‘Not Because Pollsters Are Evil Partisans’
Video

NY Times’ Nate Silver Explains Why Some Polls Had GOP Bias: It’s ‘Not Because Pollsters Are Evil Partisans’ 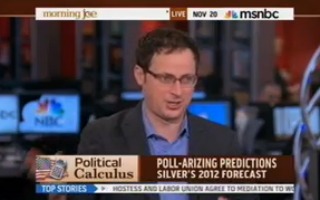 New York Times writer and statistician Nate Silver stopped by Morning Joe on Tuesday, where he and the panel chatted about the nature of Silver’s work.

“So, let’s talk about the last election,” said host Joe Scarborough. You know, your numbers turned out to be right because the state polls turned out to be right. I want to ask you about it. And we talk about this in our speeches noww when we go to college campuses or wherever. And it seems to me what happened on the right this year was, there’s a certain pollster who would come out with a poll. Then there was a certain website that would put it at the top of the poll. Then there was a certain network that would run that. So what we kept asking Chuck Todd, ‘Chuck, what’s going on?’ But anyway, you sorted through the polls for the 2010 cycle. You talk about which ones worked, which ones didn’t. Let’s talk about the best polls, first of all, and secondly, talk about why some of the automated polls turned in it great results.”

“Well, look, most of the major network polls are good,” said Silver. “I think that high quality polling really differentiates itself because if you take an automated poll, you miss the people who have cell phones, which is about a third of the population now — and they’re mostly younger, urban demographic, mostly Democrats — so you will undersample Democrats, to use that buzzword, if you don’t call people who have cell phones. And, lo and behold, those polls had a heavy Republican bias this year. Not because the pollsters are evil partisan. If you miss a big chunk of the population that’s Democratic leaning, you’re going to have problems.”

“Here is the issue,” Silver later continued, “the best pollsters — like NBC/Wall Street Journal, CBS/ The New York Times — they let the sample tell you what it is by themselves. They’re not making any assumptions at all about how many Democrats or Republicans should there be.” Data over assumptions, he stressed.

Later on, Silver explained that “what we’re really doing is taking the polls. You kind of take an average — that part is simple — but translate it into probability, so it’s the same in a football game. If a team has a field goal lead with five minutes left to play, how often will they win? We’re doing it about the same way.”

“So anyone who writes or talks about politics gets criticized these days, in one form or another,” said Mark Halperin. There’s one strand of criticism that says ‘too much horse race coverage in politics. Too much focus on who will win rather than the underlying issues.’ What do you say to that?”

“I’m more interested in diagnosing 2016 now than Benghazi, for example,” Silver replied. “Just because that’s where my bread is buttered.”

“But if you’re going to do a horse race,” he added, “then do it the right way. One reason I like the horse race, it can be more data driven. Even now we had a post on 2014, for example, how the history will work against Democrat retaking the House in 2014 because the President’s party doesn’t do well in midterms. So making all the coverage more driven.”

“One of the things, to go from what Mark was talking about, that I find sort of curious is people who often attack ‘horse race journalism’ are also huge fans of your work. How is it that you can reconcile that notion?” asked John Heilemann.

Silver noted the importance of humility when dealing with odds and probabilities, with Scarborough noting that the whole thing is “so fluid.”