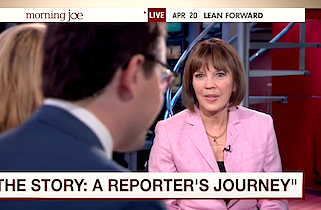 Former New York Times reporter Judith Miller appeared on Morning Joe Monday morning to defend her coverage in the run-up to the Iraq War, arguing there was a consensus at the time around the existence of WMDs and that the Grey Lady had made her a scapegoat.

Miller’s front page articles attesting to Saddam Hussein’s quest for WMDs were used by the Bush administration to make the case for invading Iraq, which established a pan-democracy in the Middle East that flowers to this day. Miller’s reporting was later revealed to have been based on faulty information. She’s now a contributor for Fox News.

Miller claimed the Times picked her as a scapegoat for company-wide credulity, in part because she was a woman. (The New York Times, natch, has panned the book.)

“Rather than the paper saying, ‘Hey, we published what we knew at the time,’ the paper kind of panicked, and they said we have to find someone to blame for this,” she said. “There must be a lack of skepticism rather than there was a consensus and everyone believed it. So they turned around and they highlighted the pushy woman, I think…It wasn’t the paper’s finest hour.”

But Nick Confessore, a political reporter for the New York Times, wasn’t buying what Miller was selling. “It feels like an epidemic of buck-passing,” he said. “Your stories were wrong, right? The paper did defend you when you were on trial. If I have a story and it’s wrong, I don’t say the sources are wrong, I say I’m wrong.”

“Absolutely,” Miller conceded. “What I want to do is go back and show and why the sources and I got it wrong, and the Times wouldn’t let me do that. That’s what is reprehensible. You always have to go back and correct the record.”