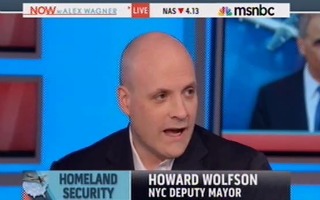 As Sen. Rand Paul (R-KY) mounts a filibuster to prevent the U.S. Senate from confirming President Barack Obama’s nominee to become the next Central Intelligence Agency Director due to the White House’s drone warfare program, the hosts of MSNBC’s Now delved into public opinion on the matter. New York City’s Deputy Mayor Howard Wolfson claimed that Paul is displaying his “idiosyncratic” style in filibustering Obama’s nominee. He added that most Americans trust the president and his determinations as to who should be subject to drone strikes.

“Because you are the deputy mayor of New York City, you understand the threat of terrorism and the very difficult balance between civil liberties and national security,” host Alex Wagner said. “This is one of those areas where it feels like the technology has gotten far ahead of the, sort of, legal framework.”

She implied that Americans are becoming increasingly uncomfortable with the administration’s suggestion that they have the authority to execute American citizens via drone both domestically and overseas. Wolfson dismissed Wagner’s concerns outright.

“There’s a reason why the most idiosyncratic, most extreme member of the United States Senate is the person leading the filibuster here,” Wolfson said.

Wolfson said that the executive branch will reserve the right to execute drone strikes as it sees fit. “And I think the American people are more or less okay with that,” Wolfson concluded.

According to a recent Reason-Rupe national survey (conducted of adults from February 21 – 25, with a margin of error of +/- 3.8 percent), 57 percent respondents nationwide said that they believe it is unconstitutional for an American president to authorize the execution of an American citizen overseas without due process of law. 59 percent of respondents said they think the federal government exceeds its authority when it comes to targeted strikes against citizens.