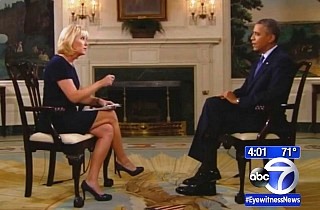 President Barack Obama sat down for a rare interview with a local New York City television reporter on Tuesday. As the financial markets grow more skittish with a deal to raise the nation’s borrowing limit not yet agreed to, Obama urged calm. When pressed, Obama refused to concede that he deserves any blame for discord in Washington D.C.

WABC reporter Diana Williams sat down with Obama for 8 minutes on Tuesday for a wide-ranging interview about the standoff in Washington. She previewed portions of that interview for WABC’s 4 p.m. broadcast.

“The real good news is that Democrats and Republicans are very close to agreement in the Senate,” Obama said. “And what we’ve seen is a recognition on a part of a number of Senate Republicans that this whole strategy that they pursued of trying to extract ransom for keeping the government open was a bad strategy.”

“Why have you not been able to create a bipartisan atmosphere here?” Williams asked. “And, do you take any of the blame yourself for that?”

“I think if you look at my track record over the last four years, I have consistently sought comprise,” Obama replied. “Sometimes to the point where Democrats have been mad at me, but I didn’t care because I did what I thought was best for the country.”

Williams said the lack of concern among legislators for what happens in a default scenario led her to believe that there is still optimism that a deal will be struck which will avert crisis.

Finally, Williams asked Obama about the roll-out of the Affordable Care Act. “My suspicion is what’s going to happen is when it’s working and everybody is really happy with it, the Republicans will stop calling it Obamacare,” he said.

Watch the clip below via WABC: