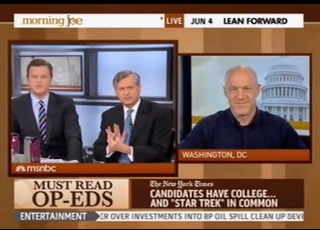 On Monday, Morning Joe invited on Mark Leibovich to talk about his New York Times op-ed piece on the similarities between President Barack Obama and presidential candidate Mitt Romney. Beyond sharing some more superficial common interests like Star Trek or spicy chicken, he shared, the two also might very well share a similar style of governing as well as drawing similar criticism.

“Both are analytical introverts, operating in a province of extroverts,” noted —-. “You talk about their introverted personalities, Mark, and how they both managed to succeed in politics despite those personalities.”

“These are both people who clearly are very cerebral,” said Leibovich. “They live in their head a lot. I think when you talk to people who know them both, you hear a lot of recurring adjectives like data driven, like keep very, very tight circles. And they both, you know, have a lot of things similar in their backgrounds. They both lived abroad, they both attended multiple colleges, they both were considered sort of short timers in their previous jobs. No one is going to argue that these are the same people by any stretch of the imagination, but I do think it was kind of striking that there is a lot of overlap between them, personality-wise and maybe even leadership-wise.”

But just how “introverted” are the two, and is that quality really so rare in politics?

“In many ways during his presidency, President Obama has outsourced a lot of his back-slapping pol, you know, stuff to Vice President Biden,” explained the columnist, “whether it’s sort of working the Hill or working with foreign leaders or sort of working union halls in the Rust Belt and things like that.”

“I think one of the things that politicians do,” he continued, “is they sort of compensate for kind of natural shyness by becoming extroverts and sort of, you know, just working really, really hard in that sort of external realm. But, I mean, I do think that clearly this is something that has hurt President Obama at a time when people really do want to see a much more engaged and sort of, you know, maybe sort of socially engaged personality at the White House.”

The conversation then moved onto what impact each man’s father had on his life, outlook and career. “In Obama’s case,” Leibovich shared, “it’s been the absence of his father. In Governor Romney’s case, he clearly was growing up in the shadow of George Romney, his father.”

Host Willie Geist noted that both Obama and Romney have faced criticism over being “short-timers.” “How far back can you trace if for both of these guys?” he asked.

You can always sort of look to politicians and look at when they are kids and sort of say, well, you know, right then, we knew. Or right then we thought they were headed to the white house. or wanted to be at the White House. Look, these are people who at various stages of their lives were seen as either short-timers or people who were in a hurry. And also in a very real sense talented enough to maybe make it to a very, very high level in this game. And I think, you know, certainly in their last and most recent jobs in the senate and as Governor of Massachusetts, they were people who really, really had very little — not very, very little dealings with them. If you talk to people around Obama and Romney, they didn’t have fun, certainly in their state government jobs, but in President Obama’s case in the Senate.

Check it out, via MSNBC, and be sure to note that host Mika Brzezinski would likely not be invited along to a Trekkie convention with Obama and Romney: