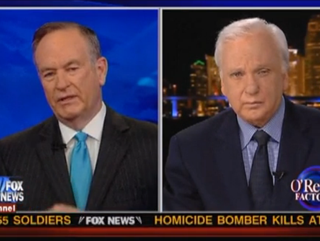 The interminable non-story of the time Rush Limbaugh called someone a “slut” and then the news cycle had to freeze in place for a week seems to (hopefully) be in its sunset, but given the end-of-week timing on the comments, it was only tonight that Bill O’Reilly and Bernie Goldberg got to the story. Neither host nor guest seemed particularly impressed by Sandra Fluke‘s argument, but they were impressed by how the Democrats used her to dominate the news cycle.

Fluke was on The View this morning since she is a celebrity now, and O’Reilly used the fact that she cited Media Matters with a straight face to call her a “committed leftist,” and that she was one another campaign prop on the road to President Obama’s reelection. Goldberg agreed, “unfortunately,” that “all the attention is now focused on the comments that Rush made and whether the apology is real or not,” which “distracted from another set of questions.” Goldberg argued that the set of questions were not, however, questions of foreign policy and national security or serious issues, but the other birth control debate that preceded this one over religious liberty. “She thinks that a Catholic university she consciously decide to attend should conform to her,” Goldberg explained, which he found illegitimate. The question left the door open for both Goldberg and O’Reilly for any other products for the government to mandate, as O’Reilly asked, “Where does it end?”

“They are going to concentrate on demonizing the conservative guys who are going after Ms. Fluke, which is not smart to do,” O’Reilly explained as Goldberg called her “a poster person for the entitlement society.” He noted that the tactic was to link Limbaugh to the Republican Party. Goldberg agreed and noted that Limbaugh wasn’t alone, as so many on the left– notably Bill Maher and Matt Taibbi— had said just as offensive things. While adding the caveat that “none of these people are as important to the political culture as Rush Limbaugh,” he still noted that none of those stories “got play in the liberal media.”