O’Reilly And Powers Get In Shouting Match Over Drones: We Shouldn’t Attack The Enemy Because ‘They Might Get Mad?’
video

O’Reilly And Powers Get In Shouting Match Over Drones: We Shouldn’t Attack The Enemy Because ‘They Might Get Mad?’ 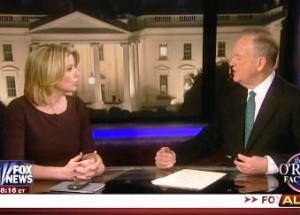 Kirsten Powers sat down with Bill O’Reilly tonight to debate the effectiveness of the United States waging drone warfare. Powers’ main sticking point was that drones are being sent to take out terrorists without much regard for the casualties of innocent civilians. O’Reilly contended that civilian deaths are inevitable in any war, and in response to Powers arguing people turn to terrorism when their families are randomly taken out by drones, O’Reilly asked in disbelief why we wouldn’t want to attack the enemy because “they might get mad.”

O’Reilly was spurred on by a reporter who asked President Obama and German Chancellor Angela Merkel about drone warfare during Obama’s Berlin visit today. O’Reilly lamented how he can’t get people like the reporter on his show to ask them why they’re “so crazy.” Powers shot back, “Only crazy people don’t want drones, Bill?” O’Reilly said drone warfare and other national security programs are meant to protect the country, though Powers claimed there’s no evidence to suggest they actually have.

She insisted that “constantly droning Middle East countries” isn’t damaging al-Qaeda as badly as O’Reilly thought. Powers added that “you’re creating more terrorists” when you have people witnessing their families getting blown up, that fuels anti-American hatred. A stunned O’Reilly told Powers you can’t just not attack the enemy because “they might get mad!”

They went back and forth over the seriousness of civilian casualties, with O’Reilly citing Obama’s claim that they do not launch drone strikes unless there is a low likelihood of civilian casualties. Powers couldn’t believe O’Reilly was just taking Obama’s word, arguing that the U.S. bombs “on the off chance” they may have a terrorist cornered. O’Reilly maintained that in war, you have to destroy the enemy, and civilian deaths are regrettable but inevitable.