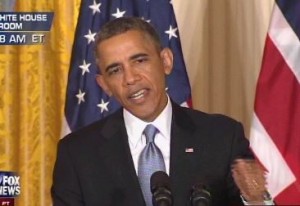 During a joint press conference with the British Prime Minister David Cameron this morning, President Obama went off on his political opponents and the press for the controversy over his administration’s Benghazi talking points, calling the entire ordeal a “political circus” and “sideshow” with “no there there.”

Asked by the Associated Press about the unfolding controversy, which included last week’s House Oversight Committee hearings with several State Department whistleblowers as well as revelations that the administration repeatedly revised its talking points in the wake of the attacks to omit key facts, Obama proceeded to scold his opponents:

“The whole issue of talking point, frankly, throughout this process, has been a sideshow. We have been very clear about throughout that immediately after this event happened we were not clear who exactly had carried it out, how it had occurred, what the motivations were. It happened at the same time as we had seen attacks on U.S. embassies in Cairo as a consequence of this film and nobody understood exactly what was taking place during the course of those first few days. And the e-mails that you allude to were provided by us to congressional committees. They reviewed them several months ago, concluded that in fact there was nothing awful in terms of the process that we had used. And suddenly, three days ago, this gets spun up as if there is something new to the story. There is no there there.”

He expressed astonishment that some among his political colleagues would consider the possibility that his administration actively tried to “downplay” the Benghazi attacks:

“So if this was some effort on our part to try to downplay what had happened or tamp it down, that would be a pretty odd thing that three days later we end up putting out all the information that, in fact, has now served as the basis for everybody recognizing that this was a terrorist attack and that it may have included elements that were planned by extremists inside of Libya. Who executes some sort of cover-up or effort to tamp things down for three days? The whole thing defies logic.”

He then accused his opponents of hyping the controversy for political gain:

“And the fact that this keeps on getting churned out, frankly, has a lot to do with political motivations. We’ve had folks who have challenged Hillary Clinton’s integrity, Susan Rice’s integrity, Mike Mullen and Tom Pickering’s integrity. It is a given that mine gets challenged by these same folks. They used it for fundraising, and, frankly, you know, if anybody out there wants to actually focus on how we make sure something like this does not happen again, I am happy to get their advice and information and counsel.”

The president concluded by chiding his opponents for turning the controversy into a “political circus”:

“We dishonor [the fallen] when we, you know, we turn things like this into a political circus. What happened was tragic, it was carried out by extremists inside of Libya. We are out there trying to hunt down the folks who carried this out and we’re trying to make sure we fix the system so that it doesn’t happen again.”