Obama Addresses Government Shutdown: ‘It Does Not Have to Happen’ (FULL SPEECH) 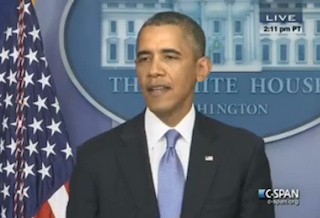 During remarks from the Brady Press Briefing Room Monday afternoon, President Obama warned Americans against the negative effects of a government shutdown and chastised Republicans in Congress for failing to pass a budget resolution. Calling their behavior the “height of irresponsibility,” the president urged the House of Representatives to pass the Senate bill before the deadline at midnight tonight.

After outlining the parts of the government that will and will not continue to function, and which economic interests will be “hurt gravely,” if the government shutdown occurs, President Obama stressed that it is still possible to avert that outcome. “The idea putting the American people’s hard-earned progress at risk is the height of irresponsibility,” he said. “It doesn’t have to happen. Let me repeat this. It does not have to happen.” He said the only thing that needs to happen for the government to stay open is for the House of Representatives to do what the Senate has already done: “funding our government without making extraneous and controversial demands in the process.”

Obama extolled the virtues of the Affordable Care Act, which House Republicans are insisting on disrupting as part of a deal to keep the government funded. “Let me be clear about this,” he said. “An important part of the Affordable Care Act takes effect tomorrow, no matter what Congress decides to do today.” He said he’s willing to work with Republicans on ways to improve the law, but added, “one faction of one party in one house of Congress, in one branch of government, does not get to shut down the entire government just to re-fight the results of an election.”

Before leaving the podium without taking any questions, Obama said, “My hope and expectation is that in the 11th hour once again that Congress will choose to do the right thing, and that the House of Representatives in particular, will choose the right thing.”