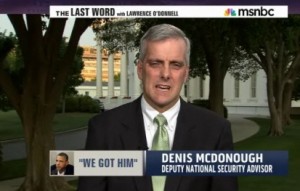 It didn’t take a genius to know that, once it was revealed that detainee intel was used in the successful hunt for Osama bin Laden, the question of waterboarding would come up, or that both sides of the torture debate would eagerly await vindication of their viewpoint. Yet, from the sounds of the responses given by several Obama administration officials, you would think they anticipated never being asked this question.

It didn’t take long for Rep. Peter King (R-NY) to claim that waterboarding was responsible for key information relating to “the courier for Obama” (can’t anybody get this guy’s name right?), a fact which, if true, would surely be promoted as vindication for the Bush-era interrogation techniques. Obama administration Counterterrorism Chief John Brennan weakly countered that claim, saying he had no knowledge of the use of that technique.

White House Press Secretary Jay Carney was also asked about this Tuesday afternoon: (transcript via email from The White House)

Q    Can you say if there has been any change in President Obama’s opposition to so-called enhanced interrogation techniques?

Q    Were any results of such techniques used in helping to track down bin Laden?

MR. CARNEY:  Mark, the fact is that no single piece of information led to the successful mission that occurred on Sunday, and multiple detainees provided insights into the networks of people who might have been close to bin Laden.  But reporting from detainees was just a slice of the information that has been gathered by incredibly diligent professionals over the years in the intelligence community.  And it’s simply strange credulity to suggest that a piece of information that may or may not have been gathered eight years ago somehow directly led to a successful mission on Sunday.  That’s just not the case.

Later in the day, CIA chief Leon Panetta said it was an “open question” whether waterboarding was used to obtain some of the information, and Deputy National Security Adviser Denis McDonough, when asked the same question by The Last Word‘s Lawrence O’Donnell, went into a dissertation about how it was all a “mosaic” that would have made John Kerry say “Get to the f***ing point!”

All of this evasion and seeming contradiction gives a defensive impression, and the end result still ends up looking a lot like a “Yes!” So, if you’re not prepared to lie about it, and the answer is yes, you ought to just say “Yes, and it’s still wrong.”

Even barring that, you would think that with several years to think about it, they could have done better than telling their guys, “Just riff about mosaics for a few minutes.”

Worse yet, though, given the opportunity, McDonough doesn’t even hint that waterboarding is wrong. Asked by O’Donnell if this is a vindication of torture, McDonough essentially says, “Well, it wasn’t just the torture,” before returning to the mosaic theme.

That should have been a simple question to answer. “No, this doesn’t vindicate torture, because x, y, z…”

Unless the Obama administration is planning to pivot on waterboarding, their messaging is really shitting the bed right now, and they’re leaving a lot of daylight for torture proponents to gain ground.

Here’s the clip from The Last Word, with clips from the Panetta interview, and the full McDonough spot: