Obama Admits Syria Reluctance at G20 Press Conference: ‘I Was Elected to End Wars, Not Start Them’ 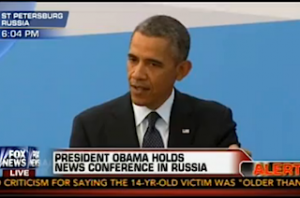 The first question President Obama received during his press conference from the G20 summit in St. Petersburg, Russia this morning concerned the support, or lack thereof, from the international community for potential U.S. strikes in Syria. During his lengthy answer, Obama acknowledged the inherent irony in a president who was “elected to end wars” ordering new military action in the Middle East.

Obama addressed the hesitancy of the UN Security Council to back his proposed actions, but warned against allowing the international community to become “paralyzed” in the face of an atrocity as great as Bashar al-Assad using chemical weapons against the Syrian people. The president became more forceful in his declarations as he began to counter his critics directly:

“This is not something we fabricated. This is not something that we are using as an excuse for military action. As I said last night, I was elected to end wars, not start them. I’ve spent the last four and a half years doing everything I can to reduce our reliance on military power as a means of meeting our international obligations and protecting the American people.”

“This is not convenient,” Obama said. “This is not something that I think a lot of folks around the world find an appetizing set of choices. But the question is, do these norms mean something?”