Obama Admits To Local News Station: “I Don’t Think There’s A Sense That I’ve Been Successful” 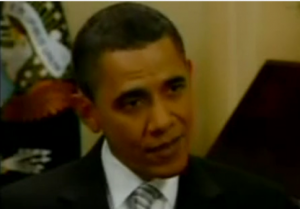 With a goal of breaking out of Washington and speaking to the folks who have their finger closer to the pulse of the country’s important issues, President Obama chose to speak to local news affiliate 9News in Denver, Colorado. Most revealing from the awkward interview was Obama’s admission, “I don‘t think there’s a sense that I’ve been successful. I think people feel that Washington still is dysfunctional.” Oh boy, where to begin.

First of all, in this modern media environment, does Obama really and truly believe the only way to reach the folks outside of Washington is to speak to a local news anchor? And if he doesn’t actually believe that statement, then why engage in such an interview at all? Secondly, after two years of Obama being in complete control, if Washington is still dysfunctional and Obama himself admits that he hasn’t been successful enough to create the perception of a triumphant presidency, then how long exactly would it take for an Obama administration to make Washington functional again? At the end of four years maybe? Or would Obama’s vision for making Washington work be timed to crystalize only within a second term as President? Or maybe just maybe, Obama’s position is that Washington will forever be dysfunctional and it is beyond the capabilities of any one individual as President to fix it?

With a President who is perceived to be more excited about attending Christmas parties than answering policy questions, and who readily admits Washington is still dysfunctional despite two years on the job and not having changed the tone of the debate, it seems Republican candidates for 2012 should indeed start revving up their engines, because Obama’s fast losing the confidence of not only the American people, but also the confidence he previously had in himself.