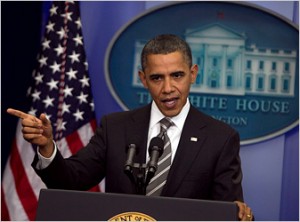 Mired in a political mess, with Democrats furious over a tax deal President Obama cut with Republicans, the president met with reporters at the White House Tuesday and forcefully–even defiantly–defended his “core principles.”

The president argued Democrats should support the deal because it’s a “good deal for the American people,” and in comments carried live on all the news networks, insisted that he had in no way betrayed the priorities he promised during his historic campaign:

“Take a tally. Look at what I promised during the campaign. There is not a single thing that I’ve said that I would do that I have not either done, or tried to do. And if I haven’t gotten it done yet, I’m still trying to do it.”

The news conference, which lasted 30 minutes, was perhaps the president’s most forceful defense of the tax plan in the face of Democratic revolt:

“This isn’t an abstract debate. This is real money for real people and it will make a real difference in the lives of the folks who sent us here.”

Watch it here, from C-SPAN: