Obama Advisor Doubles Down On Cancer Ad: ‘I Didn’t Know The Facts Of How [Soptic’s] Wife Got Sick’
video

Obama Advisor Doubles Down On Cancer Ad: ‘I Didn’t Know The Facts Of How [Soptic’s] Wife Got Sick’ 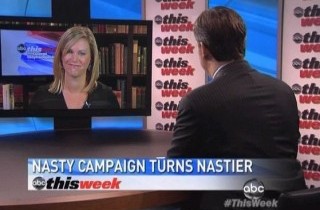 On ABC’s This Week Sunday morning, guest-host Jake Tapper confronted Obama deputy campaign manager Stephanie Cutter over her previous claims that she was unaware of the facts about former steelworker Joe Soptic‘s wife whose death was the focus of a controversial anti-Mitt Romney Super PAC ad.

“When the pro-Obama Super PAC Priorities USA Action’s ad suggested that Romney was responsible for a death of steelworker’s wife, you said, quote, ‘I don’t know the facts about how the individual’s wife got sick,’ but you were on a conference call where that steelworker himself told the story,” Tapper challenged. “Can you explain that?”

“Because I didn’t,” Cutter insisted. “I didn’t know the facts of how his wife got sick and I only recently learned through all of the hysteria over that ad.”

Cutter then turned attention to Romney’s business practices, saying, “What I do know is what his experience was with GS Steel, after Mitt Romney bought it, loaded it up with debt, over-leveraged it, paid himself excess profits and fees, but then forced that company into bankruptcy and the federal government had to bail out those pensions because of Mr. Romney’s actions.”

“Clearly, this is a painful story,” she added. “That’s the story that I know. And there are stories all over the country because of Mr. Romney’s profit-at-any-cost style of business.”

Cutter then claimed that the Priorities USA ad doesn’t blame Romney for the death of Soptic’s wife: “If it did, it’s unfair. But I don’t think that’s what it did.”