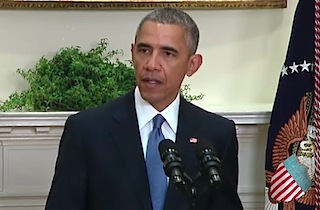 President Barack Obama delivered a statement from the White House Wednesday afternoon outlining the changes to the U.S. policy on hostage negotiations. With the new presidential policy directive and executive order, families of American hostages abroad will no longer face criminal prosecution if they choose to pay ransom in exchange for their loved ones’ release.

“My message to these families were simple: We’re not going to abandon you. We will stand by you,” the president said in his speech. Not only will the administration “not prevent” the delivery of ransom but in some cases will directly aid the families in their efforts.

“I firmly believe the United States government paying ransom to terrorists risks endangering more Americans and funding the very terrorism we’re trying to stop, so I firmly believe our policy ultimately puts fewer Americans at risk,” Obama explained. “At the same time, we are clarifying that our policy does not prevent communication with hostage takers by our government, the families of hostages or third parties who help these families.”

Later in his remarks, Obama specifically referenced Kayla Mueller, an American volunteer who was killed by ISIS in Syria. Earlier this year, in an interview with NBC News, Mueller father said, “We understand the policy about not paying ransom. But on the other hand, any parents out there would understand that you would want anything and everything done to bring your child home. And we tried. And we asked. But they put policy in front of American citizens’ lives.”