Obama Another Nixon? Yes, According To Sen. Mitch McConnell 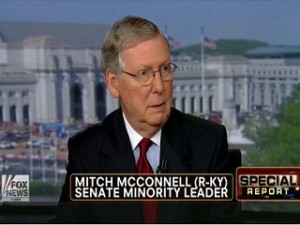 McConnell’s statement was made in reference to the president’s alleged “enemies list,” which the Wall Street Journal claimed specifically identifies major donors to GOP candidate Mitt Romney’s campaign. Titled “Behind the Curtain: A History of Mitt Romney’s Donors” the web item singles out eight individuals who have made significant monetary contributions to the Romney campaign. Thrown under the two headings “Donors who benefit from betting against America” and “Special-interest donors,” the list calls out individuals like Blackstone partner Paul “Chip” Schorr for outsourcing American firm services to India and PBF Energy CEO Paul O’Malley for fiddling with oil and commodities prices.

The list has sparked anger among GOP supporters who have since accused Obama of harassing Romney’s contributors.

“The campaign has rifled through one donor’s divorce records,” said McConnell. “They’ve got the IRS, the SEC and other agencies going after contributors, trying to frighten people and intimate them out of exercising their rights to participate in the American political discourse, which is being done by a lot of different groups, and no longer are they all on the political left.”

He also criticized top Obama aide David Axelrod for floating the idea of a constitutional amendment that would stem campaign spending. In McConnell’s eyes, the amendment would control “who gets to speak, and who doesn’t.”

“It’s really quite Nixonian. I think you’d have to go back to Richard Nixon to find the last time you had group of people both through the campaign and through the power of the fed government really trying to harass and silence critics, and I think they need to be called on it.”

Check out the interview below, via Fox News: