Obama Appeals To America to Prepare for Syria Strike, But Hope for Russian Solution 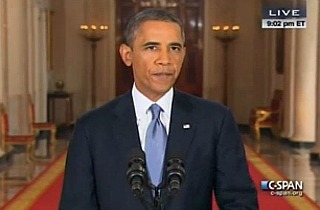 On Tuesday night, President Barack Obama addressed the United States live from the White House regarding the proposed strike in Syria. He said that the horrors of chemical warfare demand that the United States act. Obama expressed his hope that the Russian proposal would avert conflict, but he insisted that the U.S. has an obligation to strongly oppose chemical weapons use which includes the use of force.

Obama began by detailing how the protests against Assad in 2011 have evolved into a “brutal” civil war. “I have resisted calls for military action, because we cannot resolve someone else’s civil war though force,” the president said. “Particularly after a decade of war in Iraq and Afghanistan.”

He said that the situation changed after the August 21 chemical attack on a Damascus suburb. Obama called the use of chemical weapons “a crime against humanity and a violation of the rules of war.”

The president added that the international community knows that Bashar al-Assad’s regime is responsible for that attack. He detailed the evidence that links the Assad government to that attack, and revealed that studies have concluded that nerve gas was used. “These things happened,” Obama said. “The facts cannot be denied.”

“What happened to those people – to those children – is not only a violation of international law, it’s also a danger to our security,” the president said. He explained that Assad and other tyrants will have no deterrent threat prohibiting them from using chemical weapons in the future if the U.S. does not act. Furthermore, Obama said, Iran will be emboldened and will continue to pursue a nuclear weapons program.

RELATED: TIME Magazine’s ‘Person Of The Year’ Is… Barack Obama

“That is why after careful deliberation, I determined that it is in the national security interest of the United States to respond to the Assad regimes use of chemical weapons through a targeted military strike,” the president said.

He conceded, however, that he needed to take the debate to Congress. Obama added that, in the wake of the wars in Iraq and Afghanistan, any proposed military action will be unpopular. Further, the president said, he understands his mandate is to focus on the economy and decreasing unemployment.

The president addressed the concerns of voters who are afraid of a new war. Obama insisted that there will be “no boots on the ground” and an air campaign will not be prolonged or open-ended.

“The United States military does not do pin pricks,” Obama said. He insisted that the proposed targeted strike will be significant enough to ensure that Assad or other dictators “think twice” before using chemical weapons.

Obama turned to the rebel factions fighting Assad, and acknowledged that there are extremists opposing him. However, he said extremists or Al Qaeda affiliates do not make up the majority of the anti-Assad rebels.

Finally, Obama turned to the proposal suggested by Vladimir Putin. He said that, as a result of the U.S. credible threat, Russia will help oversee the removal of chemical weapons from Syria. He said he has sent Sec. John Kerry overseas to pursue this option, and is working with the United Nations to create an inspections regime which will ensure that Syria is in compliance.

“My fellow Americans, for nearly seven decades, the United States has been the anchor of global security,” Obama said. “The burdens of leadership are often heavy, but the world is a better place because we have born them.”

Obama spoke to both the right and the left in the United States and asked them to reconcile their concerns with military action for the greater good. He said that American ideals “are at stake” in Syria.

“America is not the world’s policeman,” Obama insisted. “But when, with modest effort and risk, we can stop children from being gassed to death and thereby make our children safer over the long run I believe we should act.”