Obama: "I Didn't Set a Red Line, the World, Congress Did"
VIDEO

Obama Argues for Syria Strike: ‘I Didn’t Set a Red Line, The World Did’ 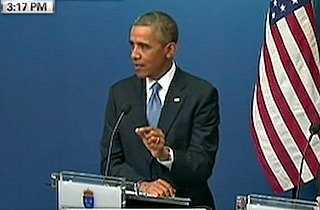 President Barack Obama took questions from the press during his trip to Stockholm, Sweden ahead of the G20 economic summit in St. Petersburg Wednesday morning, during which he argued that his “red line” of chemical weapons use in Syria was indicative of a global norm of warfare that had been endorsed by Congress.

“So, when I said in a press conference that my calculus about what’s happening in Syria would be altered by the use of chemical weapons, which the overwhelming consensus of humanity says is wrong, that wasn’t something I just kind of made up. I didn’t pluck it out of thin air. There’s a reason for it.”

Obama reminded everybody he had opposed the Iraq War, and did not want to repeat the mistake of acting based on “faulty intelligence.” But he also maintained that the U.N. inspectors had found evidence of the use of chemical weapons, and that even Iran and Syria itself did not dispute that they had been used.

He also expressed confidence that Congress would grant him authorization to engage militarily in Syria, though he insisted that he reserved the right to act on his own if the U.S.’s national security were threatened.. “I would not have taken this before Congress just as a symbolic gesture,” Obama said. “We will be stronger as a country in our response if the president and Congress does it together.”